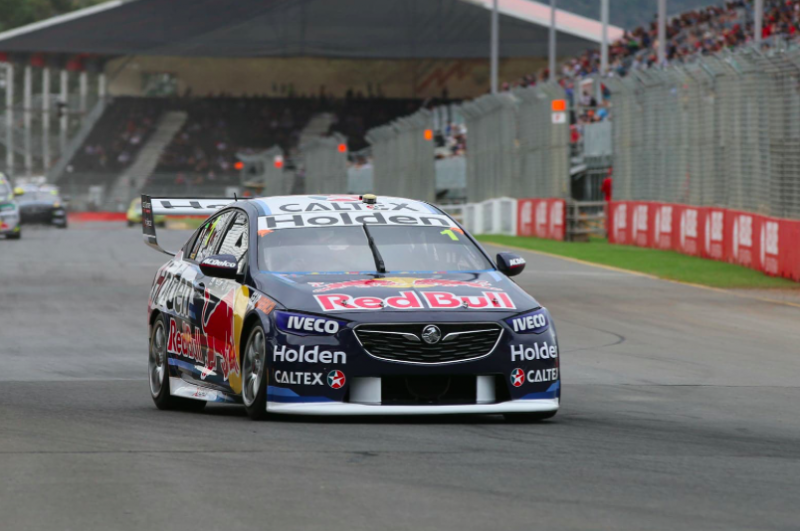 Jamie Whincup kicked off the 2018 Supercars season by topping the opening practice session of the Adelaide 500 in the new Holden ZB Commodore.

The seven-time champion was among the top runners for the majority of the session holding top spot at the halfway mark, before improving to a 1:20.16s in the final moments.

“Good way to start the year of course,” said Whincup.

“We’ve been doing some pretty big work over the break on the mechanical side of things so we’re in a good place to start the weekend.”

Winterbottom ended the session 0.21s adrift of of Whincup while McLaughlin was two tenths further back in third.

“We’re just having a go, which is nice, it’s nice to be back at the top of the timesheets, although its practice, but feeling good. I want to go racing,” said Winterbottom.

Shane van Gisbergen set the early pace with a 1:21.24s in the Red Bull Holden as the Brisbane squad dominated the early running.

Team-mate Craig Lowndes was next to lower the benchmark before he was surpassed by Whincup, who was the first to dip into the 1:20s bracket shortly before the halfway point in the session.

The reigning champion did however survive a scrape with the wall at Turn 8.

McLaughlin’s session was soon interrupted when he lost the rear and lightly tagged the wall on the exit of Turn 4.

The New Zealander returned to the pits with superficial damage to the rear of the Falcon but returned to set a flying lap, which was only surpassed by Whincup and Winterbottom.

“I felt like we were very high all session, that’s just how I feedback to Ludo so just try and get a little bit more feeling in the rear but I think the tyre grip was definitely hurting us at that point.

“When we fixed that up it was great, but you know what it’s like when you go from an old tyre to a new tyre.

“It’s quite hard to get your head around straight away, and around here you want to just creep up on it a little bit more slowly.”

Van Gisbergen ended the session in fourth ahead of Will Davison, who impressed throughout in the Milwaukee Racing Ford Falcon FGX.

Tickford Racing’s Cameron Waters briefly held the top spot in the final five minutes before sliding down to sixth at the chequered flag.

Walkinshaw Andretti United managed to place both its cars in the top 10 with James Courtney seventh, while Scott Pye was 10th.

Tim Slade was eighth and Lowndes occupied ninth in the Autobarn-backed Holden.

Nick Percat was just outside the top 10 in 11th despite stalling his Brad Jones Racing Commodore on the entrance to pit lane midway through the hit-out.

Lee Holdsworth was 12th ahead of the top Nissan of Michael Caruso in 13th spot.

Meanwhile, Erebus Motorsport’s David Reynolds lost significant time in the garage due to a stuck wheel nut on his left rear.

The team were forced to employ the use of an angle grinder to eventually remove he nut before he could rejoin the session with six minutes remaining.

The Supercars field will return to the track for a second 40 minute session at 1150 local time.