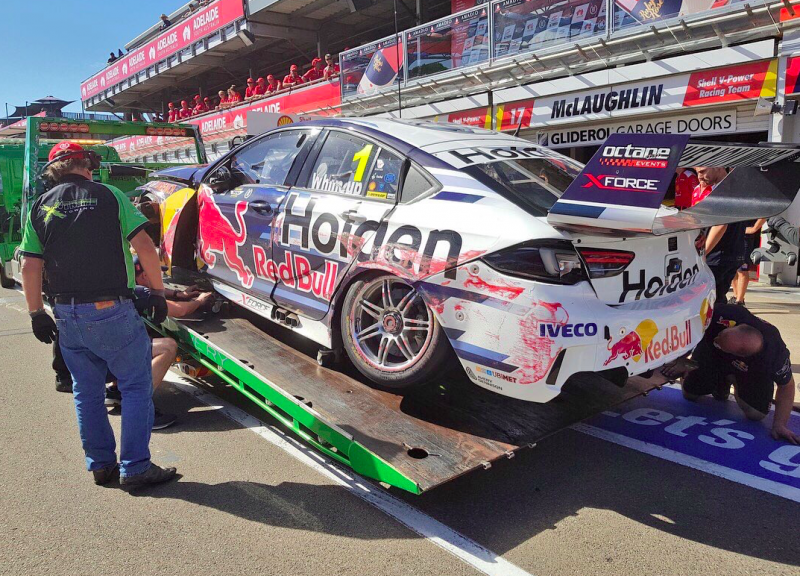 Triple Eight is reasonably confident it can repair Jamie Whincup’s Holden Commodore after a violent crash during qualifying at the Adelaide 500.

Whincup ran wide at the fast Turn 8 sweeper which results in a heavy impact with the wall causing sizeable damage to the brand new ZB Holden chassis.

The reigning Supercars champion suggested it was a 50-50 chance that the car will be repaired to contest the remainder of the weekend.

However, after an assessment of the damage team manager Mark Dutton has a brighter outlook on the repair, which will see the crew work long into the night.

The team has enough spares to complete the bolt on repairs but the damage to the rear of the chassis will be the determining factor.

A fabricator is on deck to assist with the welding of the chassis that, if required, will be carried out at the circuit.

“It is better than what it looked on television I must admit which is fantastic news,” Dutton told Speedcafe.com.

“There are three corners badly damaged; most of it is bolt on bits, not all of it, there is obviously some welding to be done at the rear.

“The bits that are designed to break first have done its job. There is always collateral damage on the way when you hit something that hard.

“That shouldn’t be an issue, some of the parts we need to repair are things we don’t repair very often but we will have them and we will push on.

“The rear birdcage and sub frame is the main area for welding,” Dutton continued.

“The most of important thing is the safety cage inside the car is all ok.

“We are going to work until it is fixed.

“The damage we spoke about on the chassis we have got the fabricator here who specifically builds those parts.

“We are confident we can repair it in a timely and safe manner.”

Whincup, who described the impact as ‘violent’, admitted the crash was down to driver error.

“I just made an error. I was pushing hard and I was up on that lap going for quickest in qualifying and I just pushed a bit too hard,” Whincup told Speedcfae.com.

“I ran a little wide and then bang. It was bloody violent actually, I’m ok but it was a big hit.

“There was a wheel flying down the road so it was all going wrong, but that’s motorsport.

“I’ve got no excuses but (there are) things that have made it difficult for me today, the resurfacing has made the corner harder than it usually is and we are still feeling out the new car.

“Today its bitten pretty hard. The car is 50-50 but if this car can be rebuilt and it will be because  I’ve got the best crew in the world.”

If the car is repaired in time for tomorrow Whincup will have a spot in the Top 10 Shootout which will decide the grid for the opening race of the season.

UPDATE at 11pm: The team has since issued an update confirming that the car is set to return to the track on Saturday.

A statement estimated that a 1am finish for the repair would be optimistic.

“Progress is going very well, we still have a lot more to do though,” said Dutton.

“On the safety side of things, some of the external chassis is a little bit touched up but no major damage, we’ll fix it.

“We’re replacing all four corners of the car. Three were damaged, one we’re just doing as a precaution.

“The right front looked fine, but we thought we’d change that out anyway. Both rears were very badly damaged, the left rear the worst with what’s called the bird cage, which is the rear sub-frame, with the forward point of that being torn off the car.

“It wasn’t a bolt-on-bolt-off component replacement, so that one we’re still working on. We’ve got the welder out, about to put the replacement part on.

“The guys and girls have been replacing every other part on the car that has to be bolted on and off. Surprisingly a lot of the bodywork is fine.

“We’ve torched a splitter and a front left door, so the impact on the available panels for the new Commodore isn’t much at all.

“It’s 10pm already, so I’d say a 1am finish would be optimistic. This doesn’t even compare to, say, Craig’s (Lowndes) crash in New Zealand in 2015.

“It looked a lot worse on TV than it actually was. I was surprised at how well it came back because I’d never seen one where the left-hand side has got hit and the axles have punched the right-hand rear tyre off the car.

“I’d never seen that before. I was expecting the worst. As strange as it sounds, I was pleasantly surprised when the car turned up and wasn’t as bad as I first thought. All good for practice three.”