Steve Johnson has claimed his first Paynter Dixon Touring Car Masters victory of the season after a measured performance in Race 2 at the Adelaide 500.

Starting from pole, Johnson moved his Ford Mustang into the lead at the first corner and was never challenged out front as a squabble developed between Gavin Bullas, John Bowe and Adam Bressington for second.

Bullas and Bowe ran side-by-side through the first chicane on the opening lap, the Ford Mustang driver holding out over the Torana in the opening exchange.

They were joined by Bressington in a Chevrolet Camaro, the trio running in close proximity though just out of striking distance from one another.

Bowe worked hard behind Bullas, who eventually cracked under the scrutiny with three laps remaining, sliding into the tyre barrier as he entered the Racecourse section.

Bressington then launch an attack on Bowe in the final two laps as, out front, Johnson managed the gap to the chasing pair.

The veteran Torana driver hung on, trailing Johnson home in second ahead of Bressington.

Bullas ended up limping home a lap down in 16th with broken steering a lap after his off, while Ryan Hansford was a retirement after his Torana suffered a differential fault that forced him out on the opening lap.

Two more TCM races following across the remainder of the weekend, the next at 1245 local time on Saturday. Tony Bates has ended the second day of running for the Audi Sport R8 LMS Cup quickest after a pair of qualifying sessions.

Bates put the #24 car on pole for Saturday’s Race 1 after topping the times in the opening qualifying session, while Yasser Shahin, who was quickest in Qualifying 2, will start from pole in Race 2 on Sunday.

The day’s running was highlighted by a spin for Shahin in Qualifying 1, the South Australian completing a full 720 degree rotation without touching the barriers at Turn 8. 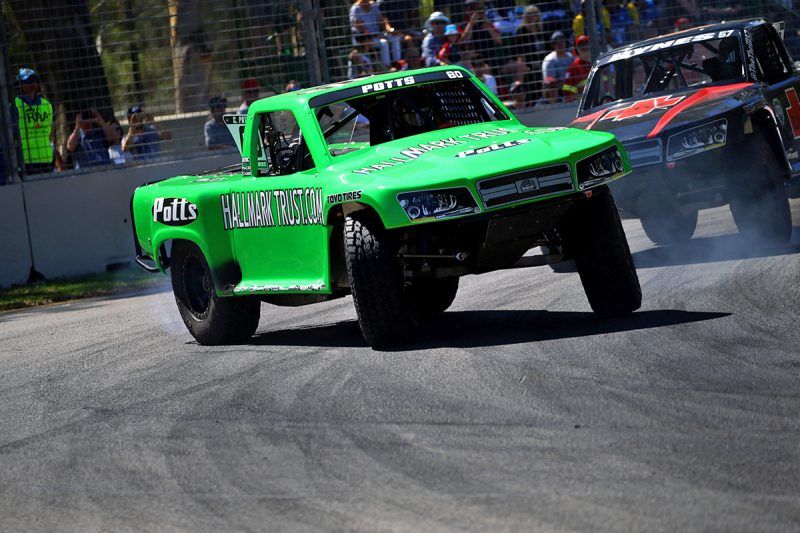 Cole Potts has taken his second ever win in the Stadium Super Trucks series after crossing the line first in a reverse grid opening race.

Making a move for the lead early at Turn 8, Potts headed all but one of the seven laps.

Matthew Brabham was the only man who managed to pass him, however, but ran wide at Turn 4, dropping back to fourth.

Coming across the line second was Arie Luyendyk Jr, while Brabham made his way back to third.

Race 2 of the Improved Production Cars series was taken out by Chris Brown, who inherited top spot when Ray Hislop struck drama on the final lap of the race.

The podium was rounded out by David Waldon and Peter Ingram, while Hislop was a DNF