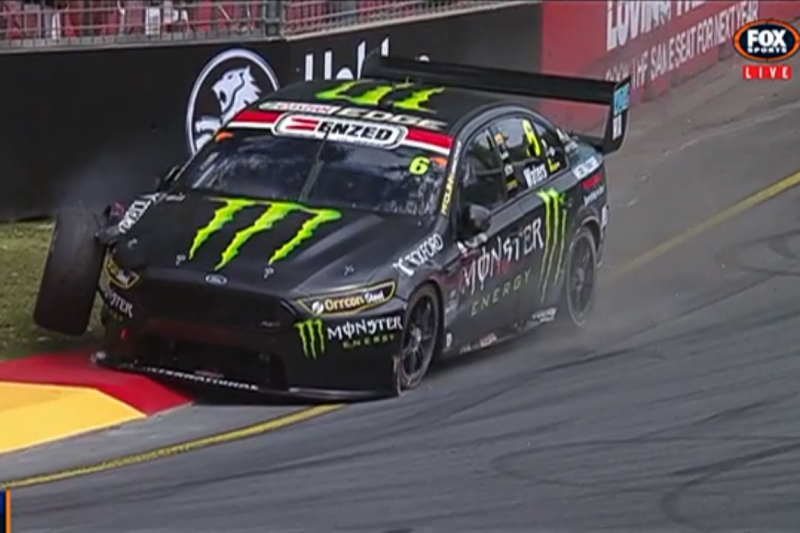 A last gasp effort from Scott McLaughlin put Shell V-Power Racing on top in an eventful second practice punctuated by a heavy crash for Cameron Waters.

McLaughlin moved to the top of the times in the final moments of the 40 minute session as he dislodged Shane van Gisbergen, who held sway for the majority of the hit out.

Times were slower than in opening practice but McLaughlin’s 1:20.35s was enough to edge the Red Bull Holden driver by 0.03s.

“It’s tough work out there. It’s a bit different now, I guess the heat has come up in the track so it’s quite loose, but through (Turn) 8 it’s sketchy, it’s very sketchy this year,” said McLaughlin.

“They have resurfaced there, and everyone thought it was going to be grippy but it’s a bit looser, well, for us it is.

“It’s different, we’re just trying to work through that. I was surprised to be where we were, but I’m sure there’s a lot more to come from people down the road.”

A flurry of times arrived in the final half of the session after Waters caused a brief red flag stoppage when he found the wall at the high speed Turn 8 with 18 minutes left on the clock. 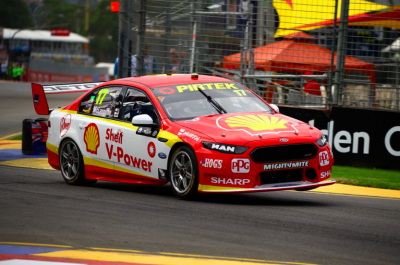 He grazed the wall with the left hand side of his car before the Tickford Racing driver then speared across the road after the initial impact broke the steering.

Waters eventually came to rest following heavy contact with the inside wall, which caused significant damage to the front of the Ford.

“It’s a shame when you do that to a brand new car, it’ll be as good as new by tomorrow hopefully,” said Tickford Racing boss Tim Edwards.

“The first hit has probably, as you say, plucked the steering arm off the upright or something like that.

While the car sustained heavy damage, a frustrated Waters emerged from the crash unscathed.

“It’s obviously pretty gutting to find the fence in practice and give the guys so much work,” said Waters, who finished in 19th position.

“I didn’t really do much different going in, it’s just got a little bit loose on the entry and it’s just gone in the marbles and stuck me in the fence.

“The hit itself wasn’t actually that hard but it broke the steering and then I was a passenger. It was the second hit that did all the damage.

“(I’m) just so gutted for everyone. The car’s feeling, well it was feeling pretty good, so hopefully we can get it fixed for qualifying.”

However, it proved to be an eventful session for the team’s third entry of Tim Blanchard, who lost his right rear wheel entering towards the end of a flying lap.

Luckily he was able to bring the car back to pit lane without issue.

Michael Caruso was the top Nissan entry in 11th, while Craig Lowndes and Jamie Whincup were 15th and 16th.

The field will reconvene for a 20 minute qualifying session at 1550 local time.