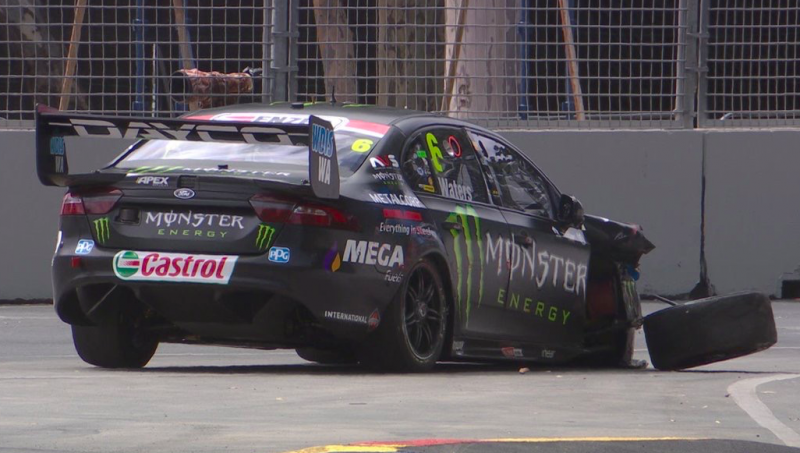 Cameron Waters will miss qualifying as Tickford Racing embark on a repair which is expected to go long into the night following a heavy crash in Practice 2 at the Adelaide 500.

Waters clouted the wall at Turn 8 after running wide at the high speed sweeper during the 40 minute hit-out.

The impact broke the steering and saw the brand new Falcon chassis spear across the road before a heavy impact with the inside wall, damaging all four corners of the car.

It is estimated that the crash caused $100,000 worth of damage and a repair job which is unlikely to be completed until 11pm tonight.

As a result, Waters will miss this afternoon’s qualifying session and will be forced to start Race 1 from the back of the grid should his car return to action on Saturday.

“No chance,” said Tickford Racing CEO Tim Edwards, when asked if the car would be repaired in time for qualifying. “On all four corners of the car its has destroyed the suspension, all the pick up points are largely bent and damaged, so we have got to replace all of those.

“The transaxle has had the driveshaft punched into it. It is fairly extensive.

“If I was betting man I’d say by 10pm or 11pm it will look good from the grandstand.”

Edwards admitted his driver made a small error going into the corner and believes the change in track surface at that section of the circuit played no part in the accident.

“He just made a small mistake going in there,” added Edwards.

“The car wasn’t handling perfect but you have just got to drive it to the car. Unfortunately when you make a small mistake at that particular corner it has consequences.

“You can’t say anything to them they are race drivers they are pushing.

“I don’t pay them to drive around at 95 percent. If they do that then they will bring the car back in one piece every time but they will be last.

“It is that fine line, I want them to push but occasionally they will go over the edge.”

Qualifying for the first race of the season is due to begin at 1550 local time.