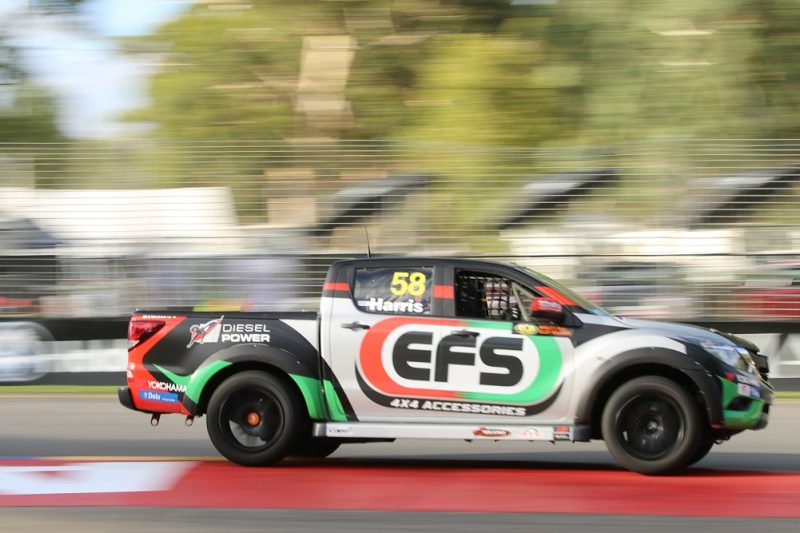 Ryal Harris has enjoyed a comfortable win in the first ever race ECB SuperUtes Series race at the Adelaide 500.

Harris led all the way while Craig Woods made up for a slow start to take second, ahead of Tom Alexander.

All 10 cars took the rolling start and it was pole-sitter Harris who held the advantage through the opening corners.

Alexander passed Woods in the first run through Senna Chicane while behind them Ben Walsh spun after side-to-side contact with Toby Price unsettled the #8 Western Sydney Motorsport Toyota Hilux.

Harris skipped out to a 1.7s advantage in the Peters Motorsport Mazda BT-50 at the end of Lap 1 and while the margin fluctuated somewhat, he had an untroubled journey to the end.

The three-time V8 Ute Racing Series winner not only opened his SuperUtes account with a race win, by 2.3s, but also the fastest lap on the eighth and final tour of the Adelaide Parklands Circuit.

Woods (Western Sydney Hilux) outbraked Alexander (Ross Stone Racing Holden Colorado) at the end of Wakefield Street on Lap 3 and gradually opened up a 3.2s gap over the New Zealander on his way to a runner-up result.

Matt MacKelden (Sieders Hilux) came home sixth, while Walsh and Tomas Gasperak (Team 18 Holden Colorado) finished off the lead lap in seventh and eighth respectively, after all three came through pit lane during the race.

Christopher Formosa failed to finish after sliding his Ranger Racing Ford Ranger into the tyre wall at Turn 4, which stripped a wheel nut off the car and prompted him to pull off the race track.

Craig Dontas’ race was also cut short with a boost problem for his Sieders Triton.