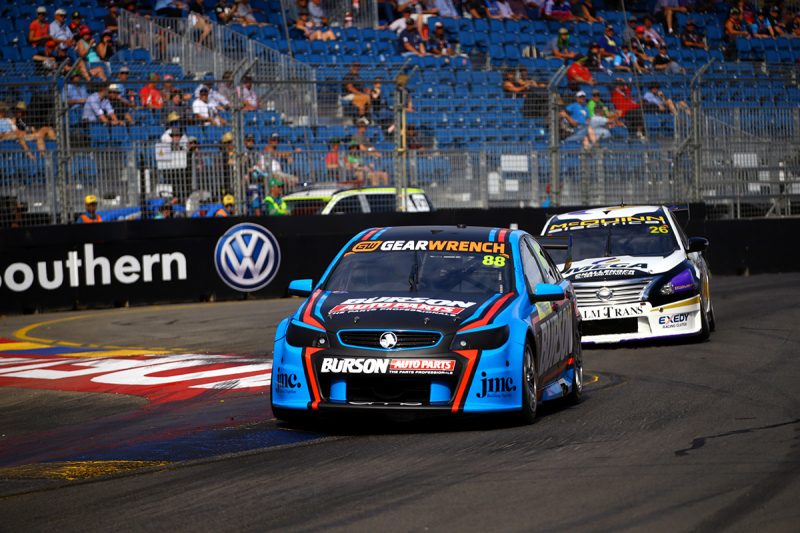 Paul Dumbrell has beaten Garry Jacobson to victory in the first race of the new Dunlop Super2 Series season in Adelaide.

Dumbrell cleared the pole-sitting Jacobson off the front row and led all the way, but was kept honest right up until the chequered flag.

Kurt Kostecki finished 2.0s further back in third, while Thomas Randle’s promising start to life in Super2 ended in the wall at the Turn 8 Sweeper.

Dumbrell made a superior launch when the lights went out and took the lead to the first corner as Jacobson covered Will Brown to at least hold on to second.

The race came under Safety Car on Lap 3 when Randle hit the wall in his #5 Tickford Racing FGX Falcon, possibly due to a power steering failure.

“I turned in and I didn’t hit anything, the steering just jammed,” the rookie reported on the radio.

Racing restarted on Lap 8, before Dumbrell earned a small margin when he set the then-fastest lap on Lap 9.

Jacobson was soon back on the rear of the #88 Eggleston Motorsport VF Commodore, however, and began to apply significant pressure.

With time lost due to a late start and the intervention of the Safety Car, the race was cut four laps short to 15 laps.

Dumbrell played slightly defensive on the final lap to ensure that he kept the #26 MW Motorsport Nissan Altima behind him and kicked off the season with a win.

Kurt Kostecki (#55 Kostecki Brothers VF Commodore) set the fastest lap on his way to a career-best third position, ahead of Macauley Jones and Brown.

Brown (#38 Eggleston Motorsport VF Commodore) appeared to struggle for pace throughout, losing third to Kurt Kostecki on Lap 3 and fourth to Jones (#14 Brad Jones Racing VF Commodore) at Turn 9 upon the restart.

Alex Rullo finished 11th after he and MW Motorsport team-mate Dean Fiore (#23 Nissan Altima) were excluded from qualifying due to cooling fans being placed on their cars in parc ferme.

Rullo (#62 Nissan Altima) had originally been classified fourth-fastest in qualifying and fought his way through from the rear of the 23-car grid, passing Bryce Fullwood on the final lap.

Fullwood (#16 Matt Stone Racing FGX Falcon) had spent several laps hassling Marjoram but couldn’t find a way through and took the chequered flag in 12th position, a position ahead of Fiore.