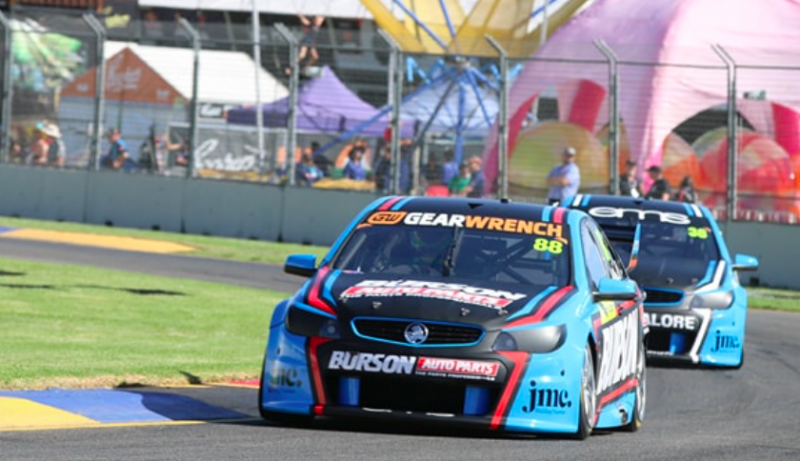 Paul Dumbrell has edged fellow former series winner Garry Jacobson in Practice 1 for the Dunlop Super2 Series at the Adelaide 500.

Dumbrell finished the session 0.1179s faster than Jacobson, with Kurt Kostecki third on the timesheets.

Jacobson was the first to lower the benchmark when the full field was let loose after 10 minutes, in his first official session in the #26 MW Motorsport Nissan Altima.

Dumbrell went quicker a lap later and was fastest for the rest of the 35-minute hit-out, but for a brief period when Jacobson returned to position one.

Kurt Kostecki (#55 Kostecki Brothers VF Commodore) had a run up the Turn 4 run-off having already set a time which ultimately yielded third position, just under 0.4s off Dumbrell’s pace.

Dean Fiore was thereabouts for much of the session on his way to fourth in the #23 MW Motorsport Nissan Altima.

Macauley Jones ended up fifth, improving after a spin in his #14 Brad Jones Racing VF Commodore at Turn 7.

Rounding out the top 10 were Chris Pither, Thomas Randle, Will Brown, Shae Davies, and Jake Kostecki.

Randle (#5 Tickford Racing FGX Falcon) paced the field by over a second when only the six rookies were on-track for the opening 10 minutes, and ended up the best of the first-timers by the end.

Alex Rullo (#62 MW Motorsport Nissan Altima) was 12th-fastest on his return to Super2.

Bryce Fullwood did not set a representative lap time with his #16 FGX Falcon hamstrung by oil pressure issues.

The Matt Stone Racing crew was reportedly fetching a spare engine for the ex-DJR Team Penske machine by the conclusion of the session.

Proceedings were briefly paused at the half-hour mark, amid a moment for Nathan Morcom when he found a tyre wall.

Morcom managed to drive the #54 Eggleston Motorsport VF Commodore back to pit lane during the red flag and was classified 13th for the session.