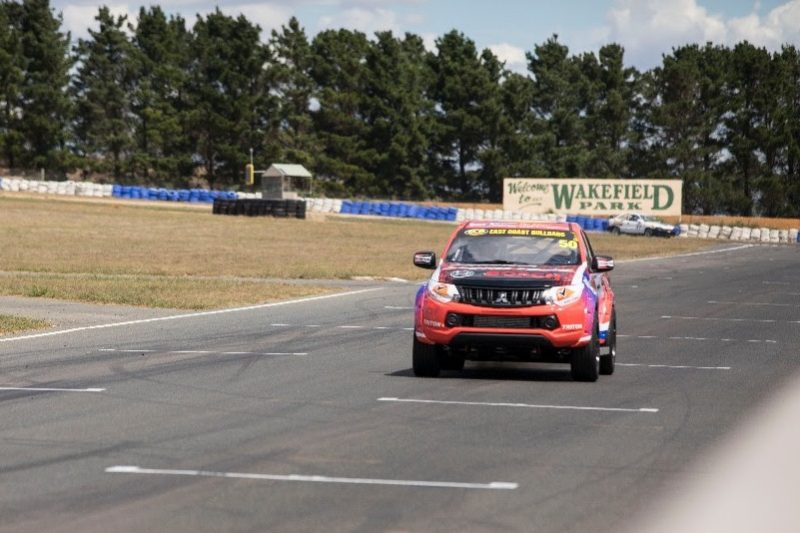 One of the Sieders Racing Team Tritons testing at Wakefield Park

SuperUtes team owner Luke Sieders says that his staff have worked “crazy hours” to complete five vehicles just in time for this weekend’s first round in Adelaide.

Sieders Racing Team (SRT) had to rush to complete a raft of cooling upgrades between a test at Wakefield Park on Saturday and despatch to Adelaide on Monday.

During that time, the team also completed an extensive late-night dyno session to try and verify that overheating issues which arose again at the Goulburn circuit had been solved.

Today’s commencement of on-track action comes just 16 days since the category’s Balance of Performance test at Queensland Raceway, where cars were plagued by overheating and turbo problems.

“A couple of the boys that work for me full-time are unbelievable, they’ve pretty much dedicated their lives to this for the last three weeks.

“They haven’t seen spouses or family or anything for the last couple of weeks doing some crazy hours, and they’re still here keen and pumped to see this succeed and get their cars on-track.

Sieders conceded that the final test was another stop-start affair similar to the BoP day, with both Mitsubishi Tritons and two of the three Toyota Hiluxes restricted to short runs only.

The prototype Hilux was the only one of the five cars to run well, having already received a partial cooling upgrade since the BoP test and a more successful run since at the Ipswich circuit.

The other cars were fitted with their final cooling packages at SRT’s Sydney base, and the prototype Hilux also an updated heat exchanger, before each ran long dyno runs in a late-night operation at the team’s workshop.

Category engine builder Craig Hasted attended the dyno session, having also been present at Wakefield Park along with Supercars Sporting and Technical Director David Stuart and a representative from Motec.

The dyno results have Sieders confident that overheating will not be a problem this weekend.

“Ben Walsh’s car (#8 Hilux) was non-stop all day (at Wakefield Park) and it was the only one that had the completed cooling package,” he explained.

“We were on a rolling road dyno for two-and-a-half hours, temps were fine, power was good, reliability was great.

“All five of my cars have spent a minimum of an hour (to) and hour-and-a-half on the dyno before we left on Monday and we’re here and ready to go.”

When questioned about the potential for problems when cars run in each other’s hot air, Sieders replied, “We had plenty up our sleeves on the dyno. We were sitting on and off the thermostat the whole time, which is good.”

Supercars’ Kurt Sakzewski, who is currently overseeing the SuperUtes project, last week also told Speedcafe.com that he too believed a more robust cooling package have solved the problems experienced at the BoP test.

SRT represents half of this weekend’s 10-car grid, including the two Western Sydney Motorsport Hiluxes which it will run.