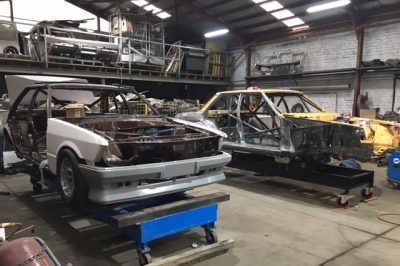 Marcus Zukanovic has delayed the introduction of his XD Falcon and will not be on the starting grid for this weekend’s opening Touring Car Masters round at Adelaide.

Zukanovic is set to be the first to race the XD in TCM, with Team Johnson having recently taken its own example back to its Queensland workshop to commence the build process.

The model’s debut is now likely to be Round 2 at Symmons Plains in early-April after Zukanovic’s Action Racing team opted against trying to rush to complete their first TCM car in time for Round 1.

“We haven’t got the car ready in time because of the Christmas break – everyone goes away and we had a couple of hurdles – but we’re going to have the car ready for Tasmania.

“It’s a shame. We really wanted to be there but it just got to the point where we were starting to rush it and things get shortcut.

“It was going to come close so we just called it and (decided to) try and buy ourselves another three to four weeks to try and get it done.”

The 2006 V8 Ute Racing Series winner, who returned to that category for its final season last year, said that he may attend the Adelaide 500 but would not be leasing another car to race in the season-opener despite earlier reports.

Action Racing will start work on a second XD Falcon for an as yet unnamed driver once the first is finished.

Steven Johnson has foreshadowed a 2019 debut for his XD, meaning that there could be three examples of the Ford on the grid next year.

He will continue until then in the 1969 Ford Mustang in which he won last year’s series.

Touring Car Masters will be first on-track for practice on Thursday at 1100 local time/1130 AEDT.

A qualifying session and four races will follow across the course of the weekend under a new round format to be introduced this year.