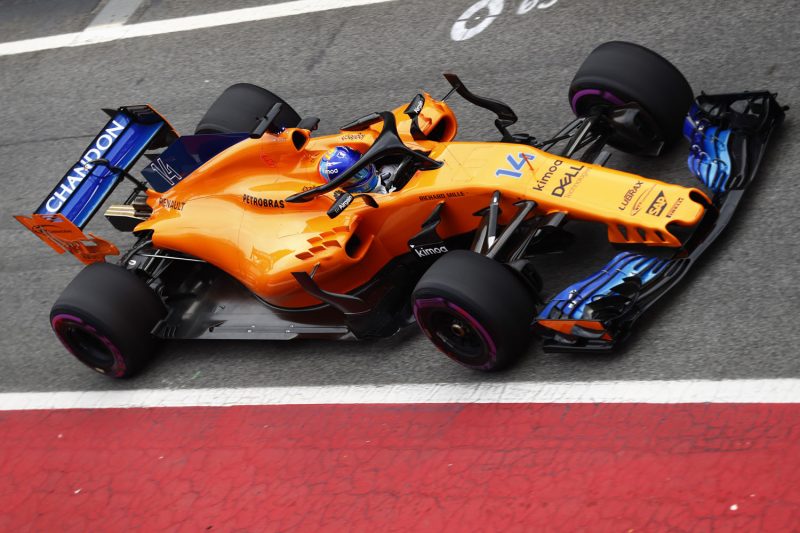 Fernando Alonso is enthusiastic of his chances in 2018 after the opening day of running at Formula 1’s first pre-season test in Barcelona.

The Spaniard recorded 51 laps across the day, which was interrupted early on when a wheel nut failure left him stranded in the gravel.

That, however, was just a blip on the radar, and Alonso spoke optimistically of the McLaren-Renault package he’ll race this year.

“Everything is running very smoothly and quite good,” he said.

“There are a few things that we are trying to change and trying to adapt, like every new car, but so far on the engine side especially I’m extremely happy and I think there is huge potential in the McLaren-Renault team.

“On the performance side it’s very early days to say but everything seems to be in line with our expectations from the windtunnel and from the data that we had before coming to the test.

“I have no reason to think we won’t be competitive. We know how good the chassis performed last year.

“We have an engine that’s not an experiment or still new. It’s an evolution of last year’s engine that won races.”

The two-time world champion even went so far as to suggest his team was in a far better shape than most, despite finding the gravel.

“A car in the gravel makes a big thing.

“There are six teams in the garage with the door closed and the car in pieces, but no one sees it, there’s no picture of that.

“There are a lot of teams with trouble, big trouble, and for us with a wheel nut it will make the thing of the day.”

Testing in Barcelona continues tomorrow, with Alonso stepping out of the McLaren in favour of team-mate Stoffel Vandoorne.