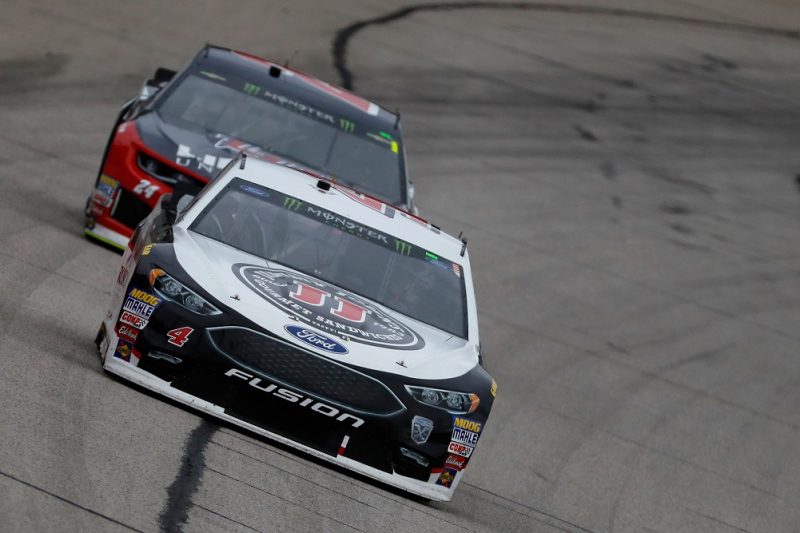 Kevin Harvick has taken a comprehensive victory in NASCAR’s Folds of Honor QuikTrip 500 at Atlanta as Fords locked out the top three.

Starting third, Harvick’s first spell in the lead came in the 10 laps to the Competition Caution at Lap 30, and he headed the field for all but one lap from then until the end of Stage 1 after 85 laps.

The 42-year-old began Stage 2 with two pit stops in quick succession after a problem with the air hose during the first one, taking the restart in 19th.

Keselowski held first position at the restart before being passed by Kurt Busch (#41 Stewart-Haas Racing Ford) on Lap 100.

Harvick, however, was making handy work of his recovery and got back into the lead at the start of Lap 126.

Kyle Busch (#18 Joe Gibbs Racing Toyota) enjoyed a four-lap run at the front as the field cycled through the pits again, but the #4 Ford was back on top on Lap 132.

Harvick stayed there until the first unscheduled Caution on Lap 160, when Jimmie Johnson’s frustrating start to the season continued with a right-front tyre failure which pitched the #48 Hendrick Motorsports Chevrolet into a spin at Turn 2.

That yellow proved pivotal in the Stage 2 outcome with Keselowski out of pit lane first and maintaining that position until stage-end on Lap 170, by which time Harvick had dropped to fifth after a poor restart.

Kurt Busch led the field back to green and remained in first position for 26 laps before Keselowski got by on the low line on Lap 199 and Harvick made the pass for second position a lap later.

Kyle Busch was on the way back up and took top spot off Keselowski on Lap 214 but pitted under green almost immediately.

That gave Denny Hamlin (#11 Joe Gibbs Racing Toyota) the lead until he too peeled off to the pits and made way for Harvick on Lap 226.

First position transferred back to Hamlin when Harvick pitted on Lap 253, but the latter came back and passed #11 on the track.

Again, Harvick pitted on Lap 288 but, armed with newer rubber, caught and passed Hamlin to reclaim the lead on Lap 290.

Aside from the final Caution on Lap 298, Harvick led for the rest of the way despite a hectic four-wide restart to win by 2.690s.

It was his second victory in as many days after also taking out the Xfinity Series race, but first at Atlanta in the Cup Series since his rookie season in 2001.

Bowyer made up a couple of positions at the restart to finish third, ahead of Hamlin and Martin Truex Jnr.

Truex Jnr had started all the way back in 35th and lost his car chief Blake Harris when his #78 Furniture Row Racing Toyota three times failed inspections before qualifying.

The 2017 Cup Series champion also dropped from sixth to 15th under the third Caution due to a rattlegun problem before climbing back and the top 10 and eventually gaining three positions between the final Caution and the chequered flag.

Joey Logano (#22 Team Penske Ford), who finished sixth, is on top of the standings ahead of Round 3, the Pennzoil 400 presented by Jiffy Lube at Las Vegas Motor Speedway, this weekend (March 2-4 local time).

Johnson spins with a failed tyre