Melandri wins at the line in Phillip Island WSBK 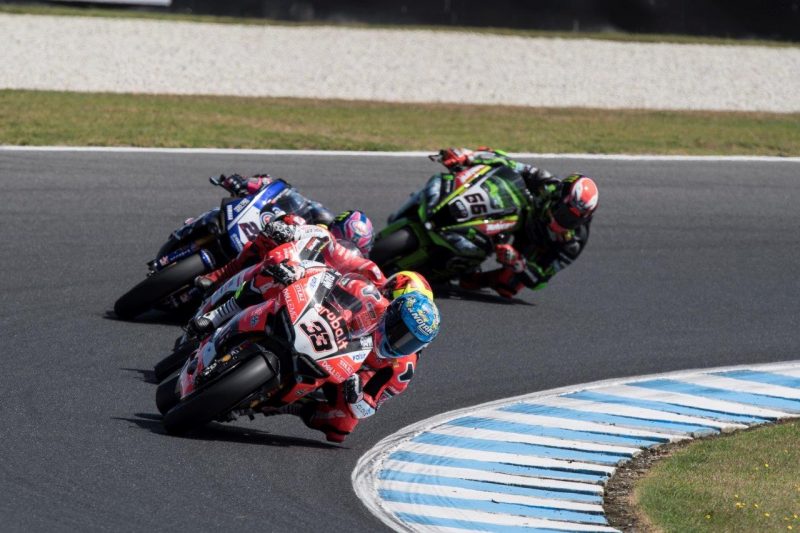 Marco Melandri (#33) went on to win the race

Marco Melandri has overtaken Jonathan Rea at the finish line to win Race 2 of the Yamaha Finance Australian Round of the Superbike World Championship by just 0.021s.

Rea looked to be safe when Melandri had a wobble at the Hayshed on the final lap, but the Italian powered his Ducati past the #1 Kawasaki to sweep the round at Phillip Island, with Xavi Fores also on the podium.

There was also drama when race leaders twice crashed, namely Eugene Laverty early on and Chaz Davies (Aruba.it Ducati) around the halfway mark.

The race had been declared a flag to flag due to excessive rear tyre wear a day prior, meaning compulsory pit stops from Laps 10 to 12 of 22.

With riders freed from any need to conserve tyres, and a headwind on Gardner Straight, the first half of the race was willing.

Rea won the start from the middle of the front row but lost the lead within the first lap when Laverty lunged from third at the Turn 4 Hairpin and made the Kawasaki Racing Team rider stand up.

Laverty had a second-plus lead until he crashed his Milwaukee Aprilia at Siberia on Lap 3, leaving Davies in front amid a hectic slipstreaming battle.

Davies ran wide at the Turn 4 Hairpin next time around as Rea simultaneously passed Fores to move back into top spot.

Davies and Fores hit back as they blazed past Rea on Gardner Straight at the end of Lap 5, and would exchange first position multiple times before Fores on the satellite Barni Ducati kicked off the pit stops at the end of Lap 10.

All but two riders pitted at the end of either Lap 10 or Lap 11, and it was Fores who emerged back in first position when Davies dropped his bike while the effective race leader at MG.

Van der Mark and Melandri had a brief duel before the latter broke the lap record on Lap 15 and set after the leading trio.

He made a bold move down the inside of Sykes at Doohan Corner at the start of Lap 17 and soon latched onto the rear of Rea.

Rea led for the first time on Lap 19, but only for a few hundred metres when he ran wide at the Southern Loop and let Fores back past.

He re-passed a lap later before Melandri got by Fores at the Turn 4 Hairpin.

Melandri slipstreamed ahead of Rea as they started the final lap, only for Rea to immediately fire back past through Doohan Corner.

However, Melandri prevailed at the death for his second WorldSBK win at Phillip Island just a day after his first in the category at the Victorian circuit.

The 35-year-old had previously won in all three classes of grand prix motorcycle racing at the Island.

Laverty had remounted and earned a point as the final finisher in 15th, but Davies did not continue after his spill.

Daniel Falzon was the only Australian to start the race but the Yamaha Racing Team rider was disqualified when he ran a lap too long on his first rear tyre.

Troy Herfoss and Wayne Maxwell both ended up sitting out the race after crashes in Race 1, but are still in action in the Australian Superbike Championship.

Melandri’s 100 percent points haul has him 17 points ahead of second placed Sykes as the championship now moves to Thailand for Round 2 on March 23-25.

In the Supersport World Championship race, Ant West was a non-finisher due to early technical dramas as Lucas Mahias took victory.

Next Story Staring fights through for ASBK honours at PI