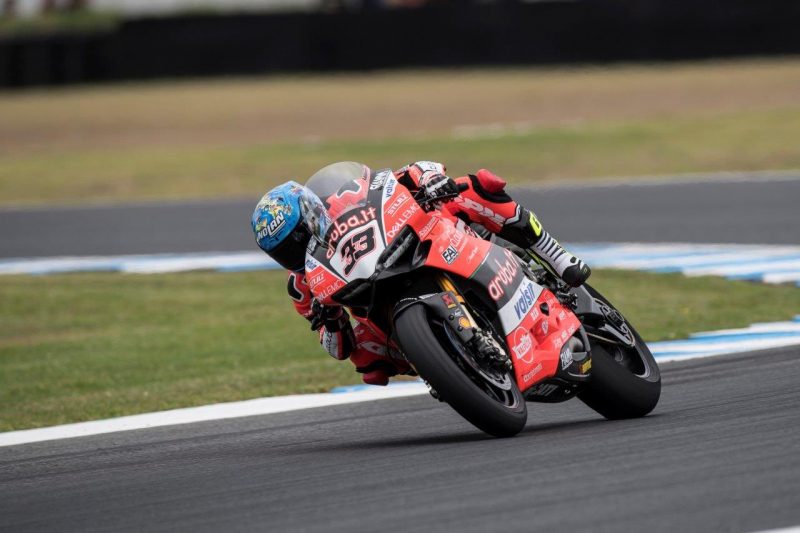 Marco Melandri has overcome the factory Kawasakis to win the first race of the 2018 Superbike World Championship at Phillip Island.

Melandri trailed Tom Sykes and Jonathan Rea for the first half of the 22-lap race but rode into the lead at the start of Lap 19 and went on to win by just over a second.

Sykes took second and Chaz Davies came from further back to also make the podium in a race run in overcast conditions.

Having qualified on pole, Sykes led the field away despite a challenge from Melandri into the first corner.

The Aruba.it Ducati rider had to get out of the move, allowing a fast-starting Rea to slip past at Southern Loop and make a Kawasaki Racing Team one-two.

Sykes skipped away to a 1.599s lead after four laps as the field surprisingly became somewhat strung out.

Melandri, however, stuck with Rea and made his move at the Turn 4 Hairpin on Lap 15, by which time then-fourth placed Xavi Fores was more than five seconds behind.

Trailing the leader by just under a second by that stage, Melandri caught Sykes over the next two laps before using a slipstream to get past on Gardner Straight with four laps remaining.

What an incredible race for @MarcoMelandri33!! 👀

Ducati rider is riding in an awesome pace and grabs 1st position! pic.twitter.com/Plj5k0a6Q1

The Italian never looked back as he took his first WorldSBK race win at Phillip Island.

“With the first race of the season it’s something unbelievable. The team did an awesome job and I’m so happy.”

Team-mate Davies made it two factory Ducatis on the podium, having prevailed in a battle with Fores on the satellite Barni Ducati.

The Brit might have thought he had earned fourth place but Rea slowed dramatically in the closing stages and was passed by both Davies and Fores in consecutive corners at the end of Lap 21.

Rea, who may have run out of rear tyre life, lost bulk time on the final lap to finish 4.075s behind Fores in fifth.

It was a tough day for the three Australia wildcards, none of whom made the finish.

Wayne Maxwell bit the dust when he crashed Yamaha at Lukey Heights on Lap 2, while Daniel Falzon (Yamaha) and Troy Herfoss (Honda) both succumbed to mechanical problems.

Friday fast man Lorenzo Savadori (Milwaukee Aprilia) was declared unfit to start the race after breaking his left collarbone in a crash at Siberia during Superpole 2.

The Yamaha Finance Australian Round concludes tomorrow with Race 2 from 1500 local time/AEDT, with Fores starting from first position and Melandri ninth.