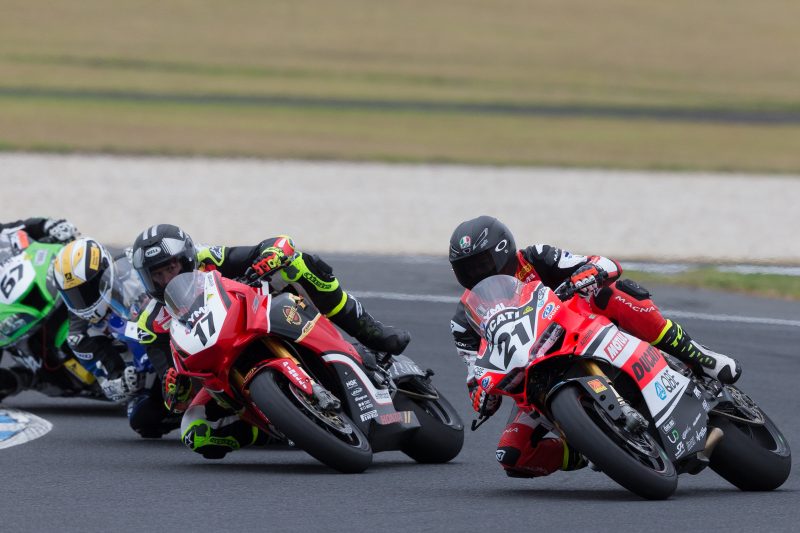 Troy Herfoss has passed Troy Bayliss on the final lap to win a thrilling Race 1 of the opening round of the Australia Superbike Championship at Phillip Island.

Bayliss (Ducati) had fought his way back through the field in a weather-affected race and finished second, with pole-sitter Josh Waters (Suzuki) third.

Waters led the field away while Bayliss dropped two positions from his front row starting berth to run fifth.

Yamaha riders Wayne Maxwell and Daniel Falzon, who like Herfoss (Honda) are on double duty in WorldSBK, diced early on with the former taking over second position on Gardner Straight.

Bayliss recovered the positions he had lost at the start by the time red flags were called on Lap 6 for rain, having overtaken Bryan Staring (Kawasaki) and Falzon.

The race was restarted with riders ordered as they finished Lap 4, including Herfoss in sixth, and Waters and Bayliss moved to the head of the field.

Waters was struggling and Bayliss took over top spot on the third lap after the restart before a huge stoush between he, Falzon, Herfoss, Staring, Waters, Aaron Morris (Yamaha), Alex Phillis (Suzuki), and Matt Walters (Kawasaki) took place.

Herfoss took the lead on the third-last lap, Bayliss took it back next time around, but on the final 4.445km circuit Herfoss got the lead for good.

“I’m really so happy to get a race under my belt,” said Bayliss.

“In dodgy conditions you have really got to use your head, but it was very stressful.

“It was a real dog fight in part two (after the restart).

“Waters and Herfoss are Australian champions, switched on and good to ride with, so even though it looked pretty wild, we were pretty good to each other.” 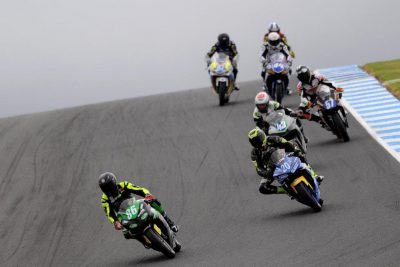 Oli Bayliss out in front in Supersport 300 pic: Russell Colvin

Maxwell was ultimately a non-finisher, having crashed before the red flag.

While he rejoined the race, he took wet tyres for the restart when slicks turned out to be the better option despite the encounter officially being declared wet.

There was a Bayliss victory earlier in the day when son Oli won Race 1 in Australian Supersport 300 before finishing runner-up to Tom Bramich in Race 2.

Round 1 of the Yamaha Motor Finance Australia Superbike Championship presented by Motul Pirelli wraps up tomorrow with two more races.

Next Story WSBK introduces CPS due to PI tyre wear