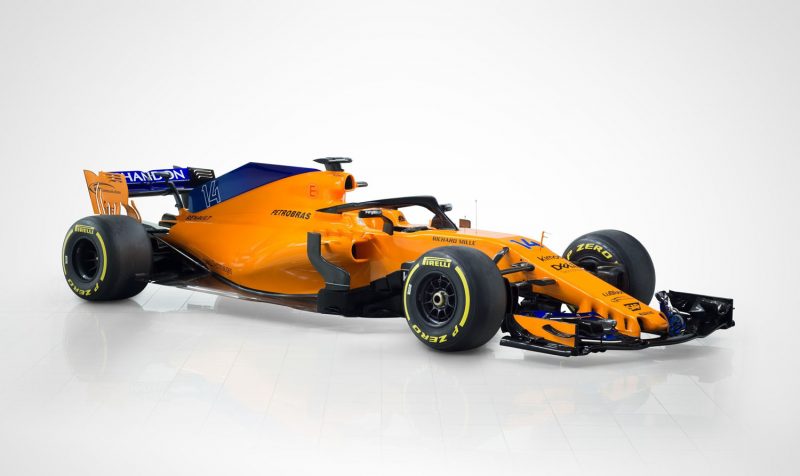 McLaren will sport a striking new livery in the 2018 Formula 1 World Championship courtesy of the MCL33.

The orange design with blue accents harks back to McLaren’s early heritage, when Bruce McLaren and Denny Hulme ran their BRM powered M5As in the orange of sponsor Gulf Oil.

Since the late 1990s the team has adopted a predominantly black or silver livery, featuring splashes of red or orange in deference to the team’s history.

McLaren has switched to Renault power for the forthcoming season, finally pulling the plug on its deal with Honda after three dismal years.

It makes 2018 a watershed moment for the team, which has claimed to boast one of the best chassis’ on the grid.

The change in engine supplier should then see see the Woking squad make significant strides up the grid.

“The McLaren team was created by a brave pioneer, and has had bravery at its core ever since,” said executive director Zak Brown.

“Whether it’s been with brave drivers, brave leaders or brave fortune, this team has always fought back.

“And we definitely view 2018 as the year when McLaren will move closer to the front, fighting teams and drivers as we improve our fortunes.

“Our return to a papaya orange livery for this year wasn’t simply an emotional decision; it demonstrates that we are listening to our fans, building deeper engagement with them and the Formula 1 community as a whole.,” he added.

“We want McLaren to earn respect on and off the track, and this felt like a good starting point.

“We want to show everyone what makes this team special, whether that’s our fans or our partners – there’s room for more on our journey.”

Last year McLaren finished ninth in the championship with just 30 points to its name, and hasn’t had a podium finish since the 2014 Australian Grand Prix.

“Looking at our new car, I feel incredibly excited – but also apprehensive,” the Spaniard said.

“I know just how important this car is to the team, and I just hope that it delivers in the way we all want it to.

“If we’re able to develop the key strengths of last year’s chassis and marry it to an improved Renault power unit, then I think we’ll be able to take a step forwards.

The 2015 GP2 champion Stoffel Vandoorne also stays on for what will be the Belgian’s second full season.

During the off-season McLaren confirmed a number of new commercial partners, including deals with CNBC, Petrobras, and Dell.

The team will now roll the new car into the truck and head to Spain for the opening pre-season test, set to commence on Monday.

Force India and Toro Rosso are the only teams yet to unveil their 2018 cars, though the latter has shared an image of its new machine performing a shakedown test on social media. VIDEO: Watch the unveiling of the 2018 McLaren MCL33

Previous Story VIDEO: Onboard with Bottas and the halo