Ferrari has unveiled the SF71H ahead of the 2018 Formula 1 world championship.

Rumours swirled in the lead-up to the launch that the team could reveal its car totally bereft of sponsorship branding.

Instead the car features swathes of empty space, with the sidepods and nose carrying comparatively limited branding.

Ferrari employs a somewhat unusual sponsorship process, selling the car in its entirety to Philip Morris, the company behind tobacco company Marlboro, which then on-sells space.

With Italian F1 television coverage set to move behind a paywall in 2018, and Philip Morris pledging to promote smoke-free products, there were suggestions the car could be revealed without any sponsorship at all.

While the new car has put those concerns to rest, the airbox, which has carried a stylised emblem linking Ferrari and Phillip Morris since 2011, is conspicuously vacant.

The team claims the new car is an evolution of its 2017 model, with a longer wheelbase and more aggressive cooling system.

On the driver front, Kimi Raikkonen will enter his 16th season in F1, and is now the elder statesman on the grid at 38 years of age.

The 2007 world champion is in the final year of his current contract, with rumours linking Daniel Ricciardo to his seat for 2019.

Across the other side of the garage, four-time champion Sebastian Vettel will enter his fourth year with the team.

The German won fives races in 2017 and mounted a serious championship challenge before ultimately losing out to Lewis Hamilton.

Ferrari is the seventh team to unveil its new car, which will head from Maranello to Barcelona in time for the opening pre-season test on Monday. 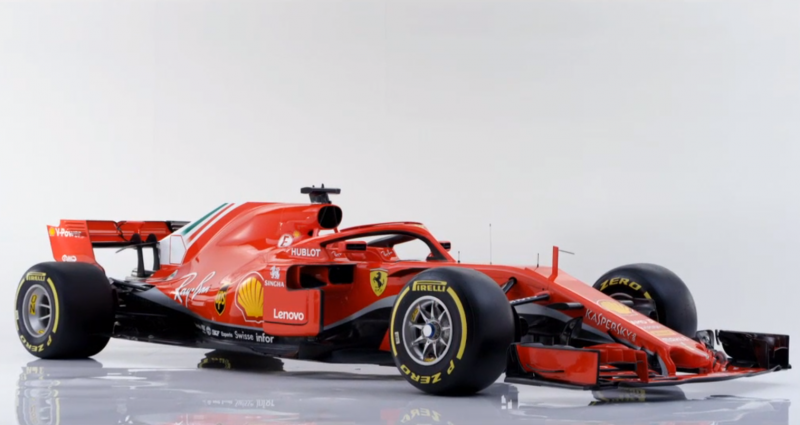