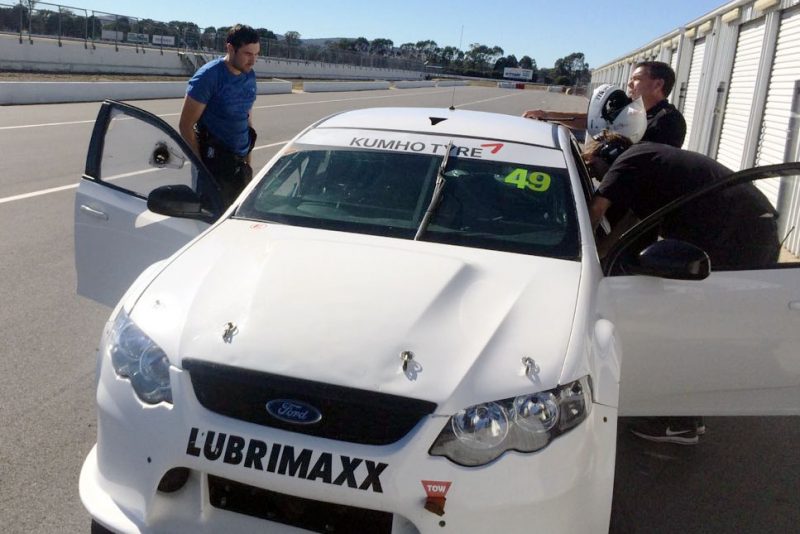 Second generation racer Mathew Radisich is closing in on a drive in the Kumho Tyres V8 Touring Car Series.

The ex-Formula 3 racer is looking to a complete a deal that will see him race for Image Racing in a Ford Falcon FG.

The team has two ex-Stone Brothers Racing FGs in its stable, with Jordan Baldwin last month confirmed in one of the cars.

“I’ve done a test with Terry Wyhoon at Image Racing, and it went really well,” the 28-year-old told Speedcafe.com.

“I think he was rapt. He came up to me and said I’d done a really good job.

“I was only meant to be there for the morning, and ended up running in both of his cars out there and doing quite a few laps over the full day, so it was a good test day.

“We ended up a second faster than any of the other drivers that were out there, and only a second off the pole time from last year on old tyres.

“I was personally pretty rapt to have been out of the car for eight or nine years to hop back in and go that quick straight away.”

Radisich is the nephew of two-time World Touring Car Champion Paul Radisich, who has played an integral role in stitching the deal together with Image Racing.

His last racing experience came almost a decade ago, competing in the 2009 Australian Formula 3 Championship.

The Melbourne-based New Zealander’s focus is now on securing the remaining budget needed to complete the season.

“We’ve got part of the budget, we’re just trying to put together the rest of the budget to do a full season with him,” he admitted.

“The first round’s April, so we’d like to get it all sorted out before then – as early as possible would be nice, but you know how motor racing is, you’re always trying to hustle and put something together at the last minute.

“That’s the good thing about this series now, is that every round is with the Supercars, so you’re going to get noticed.

“It’s just a lot easier to get sponsors and to get notoriety when you’re running with the main game.

“When you’re away from that I think it’s pretty difficult to get that attention.”

The unofficial third-tier Supercars series kicks off at Phillip Island on April 20-22 with the Virgin Australia Supercars Championship.