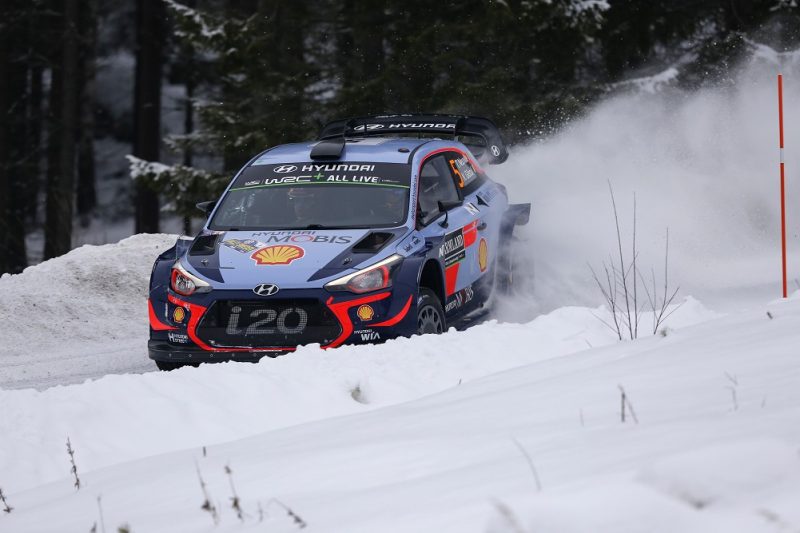 Thierry Neuville now holds a more comfortable lead despite early dramas on the penultimate day of Rally Sweden, while Ott Tanak and Kris Meeke made contact on Special Stage 13.

Neuville sits 22.7s clear of Citroen’s Craig Breen, while the other two Hyundais of Andreas Mikkelsen and Hayden Paddon are third and fourth.

The overnight leader began Saturday with a paddle shift failure in his i20 but still managed to extend his lead on Special Stage 9.

He also spun on the following Hagfors stage, but set the fastest time in four of the day’s other six stages to finally enjoy some breathing stage after a tight battle on the Friday.

“Things have gone pretty much to plan today and we can be pleased with our day overall,” said Neuville.

“We had a bit of a stressful start this morning after a technical issue in the first stage and a spin in the second, which cost us some time.

“After that, though, we were able to increase the gap stage by stage. We gave a big push through SS13 and SS14, as we’re involved in a very close fight. We scored more stage wins, which was a nice reward for our efforts.”

Breen had already emerged as Neuville’s nearest rival when he went against the grain in carrying only one spare tyre for the afternoon loop, winning SS12 but generally losing ground to the leader thereafter as the roads became less snowy and more gravelly.

Mikkelsen dropped to fourth win a spin on SS10 but moved back up to third on the following stage and remained in the same position for the rest of the day to now be 32.0s off the lead.

Paddon is a further 16.6s further back after a tentative start to the day, but lost 8.0s to Mikkelsen in the final stage alone when the New Zealander got stuck on the inside of a hairpin. 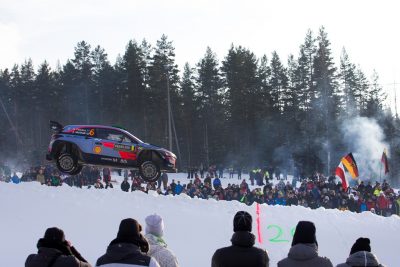 “(It was) Not quite the day we wanted but we are still enjoying ourselves and doing the best we can,” said Paddon.

“We started the morning loop knowing that we would be playing a waiting game. The way that the car has been set up for my driving meant we had to find a compromise between my own confidence and the outright performance in those first stages.

“The wider lines on the roads in the afternoon played more to my strengths, so we had to be patient and wait for the stages to come to us. We were definitely more comfortable to push in the repeat loop.

“Unfortunately, we lost a little time stuck in a snow bank on the final stage, but we are still in a good position to push on tomorrow.”

Mads Ostberg sits fifth but has already claimed the award for the longest jump on the famous Colin’s Crest, launching his Citroen 42 metres near the end of the Vargasen stage.

Esapekka Lappi in sixth has nearly a minute on his seventh-placed Toyota team-mate Jari-Matti Latvala.

Teemu Suninen follows in the lead M-Sport Ford, dropping two positions across the day after a very untidy morning loop.

Tanak (Toyota Gazoo) had a highly eventful day, winning three stages but also hitting Meeke as the latter attempted to recover from hitting a snow bank.

The Estonian, who came into Round 2 in second in the championship, caught the Citroen and attempted to pass but succeeded only in riding up on its left side and getting stuck in another snow bank (See Highlights: Stages 12 to 15 below).

M-Sport Ford team-mates Sebastien Ogier and Elfyn Evans are 10th and 11th, the latter of whom had a wild spin on SS13.

Round 2 of the World Rally Championship concludes tonight (AEDT) with two passes through the Likenas stage and the Torsby Power Stage, for a total of 51.94km of competitive running.