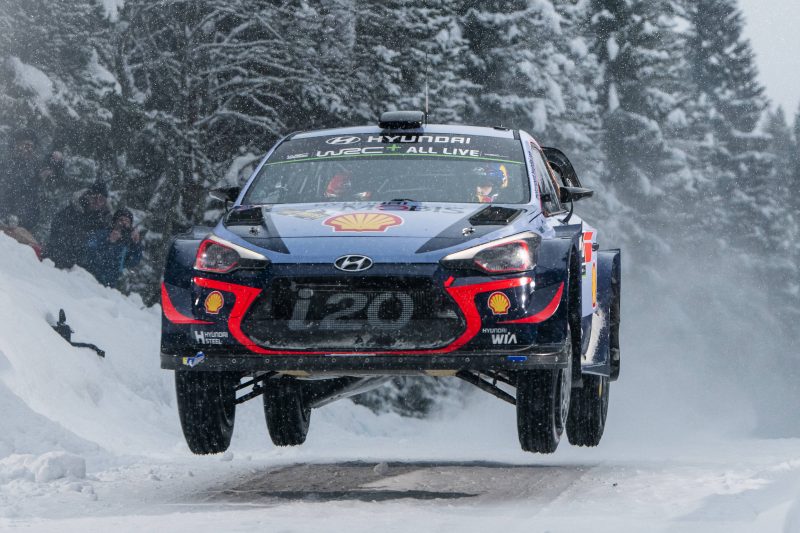 Thierry Neuville holds a 4.9s lead over Andreas Mikkelsen as the Hyundais moved into the top three positions on the first full day of Rally Sweden.

Neuville took over the lead from Toyota’s Ott Tanak with the fastest time in Special Stage 3, the second stage of the day, and remained there for the rest of the day despite the burden of having to run on the snow-covered roads before his main rally rivals.

“What a day,” said Neuville. “We have just tried to stay focused on the job and doing what we can from our middle road position.

“The car has felt good, the settings were spot on, and I have felt comfortable. The cars at the front have suffered a bit in the snowy conditions. Every time I pushed I felt that I was creating faster lines for the guys behind to follow, so it was a tricky balance.”

Mikkelsen won SS4 and shadowed Neuville for most of the day, at one stage trailing by only 1.0s before losing a little ground in the final two afternoon stages. 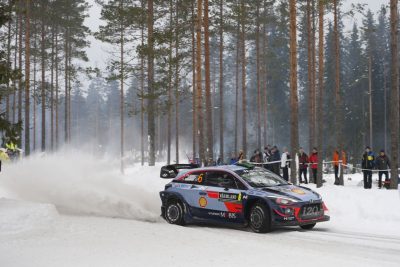 Hayden Paddon, in his first World Rally Championship start of the year, was only eighth overall after each of SS2, SS3, and SS4, before winning SS5.

The New Zealander edged his team-mates in what was also a Hyundai one-two-three on the final stage of the day, SS8, to leapfrog the top two Citroens into third overall.

Craig Breen jumped from 10th after the Thursday night opener to be the best of the rest in his Citroen, having won SS6 and SS7.

Breen was third ahead of the final stage of the day but a slight error opened the door for Paddon to take the place.

Mads Ostberg (Citroen) is 0.6s further back, ahead of the lead M-Sport Ford of Teemu Suninen.

While Toyotas were first, second, and eighth after SS1 on Thursday night, Cars #9, #7, and #8 sit seventh, eighth, and ninth at the end of Friday running.

Esapekka Lappi was second after SS5, surviving an impact with a rock, but tumbled to seventh on the next stage when he ran off and covered the front of his Yaris in snow, blocking the radiator and losing power.

Behind him is Jari-Matti Latvala in eighth and Ott Tanak, who came into the day with the rally lead and won SS2, in ninth.

Both struggled badly as some of the first out on road owing to their championship positions, with points leader Sebastien Ogier languishing in 12th.

“It’s been a difficult day, but one that we couldn’t do anything about,” said the M-Sport Ford driver.

“Opening the road, we knew that the conditions would be a challenge, especially on the second pass, but it was worse than any of us had expected.

“We tried to push a couple of times, but in these conditions it’s a fight just to stay on the road. And behind, everyone is taking the same line and it’s getting faster and faster with every car.”

The other M-Sport Fiesta of Elfyn Evans is also outside the top 10 in 11th, one position behind Citroen’s Kris Meeke.

Day 3 from this evening (AEDT) features eight stages including two loops of three, a repeat of the Thursday night Karlstad trotting track stage, and a sprint at Torsby, totalling 120.31km.