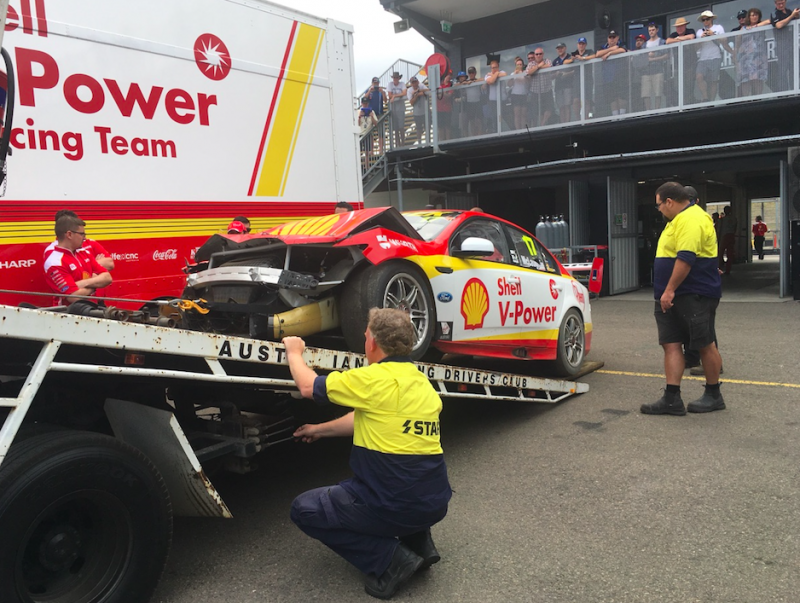 The Shell V-Power Racing driver suffered a tyre failure on the entry to the high speed Turn 1 which pitched him into the tyre wall causing damage to the front end of his Falcon FGX.

McLaughlin’s car was stranded on the outside of Turn 1, drawing the red flag as a flat tow was called to extract the DJR Team Penske Falcon.

The 24-year-old confirmed that the rubber in question was a 2017 specification tyre, while describing the crash as arguably the biggest of his career.

“In Turn 1, just normal thing, no dramas whatsoever, and then just the tyre went down and went straight ahead,” said McLaughlin.

“Really, I’m pushing the pedal at 1500PSI and it was doing nothing, and ended up in the wall.

“It was decent (the hit). Thankfully for most of my career I haven’t had a big, big head on hit.

“That was as big as I’ve had but the car and everything did its job as per usual, and the tyre wall. But it definitely skipped across the gravel pretty easily.

“I think it proves and backs the decision of Supercars to move to the ’16 tyre because we had a ’17 tyre on there. I guess it’s maybe an issue, but we’ll have to work it out.

“We just didn’t have any other tyres, and we were just trying to get a bit of a baseline of where we were.

“(I) didn’t really have an amazing morning session, we were just bowling around on bad used tyres from 2016, so for us we just focused on baselining the car.

“And to be honest the car felt awesome its just unfortunately that happened.”

The session was halted for about 20 minutes before the field was released again at 1417 AEDT.

The team has confirmed that McLaughlin will sit out the remainder of the day.