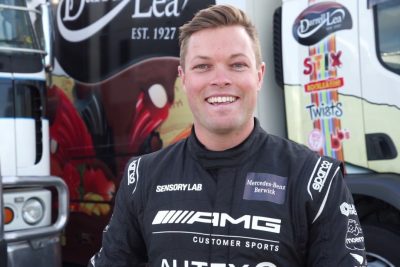 Dominic Storey says that he has left Winton more confident than expected after his first significant running in a Supercar with Eggleston Motorsport.

Storey will embark on his first season in the Dunlop Super2 Series having last year won the Australian Endurance Championship with Peter Hackett in an Eggleston-prepared Mercedes-AMG GT3.

The 28-year-old’s prior experience is primarily open-wheelers, including Formula BMW and a handful of GP3 races, though he has also competed in his native New Zealand’s V8 SuperTourers series.

“I made massive improvements over the two days and I’m actually a lot more confident than I thought I would be going into (the test),” he told Speedcafe.com.

“I thought two days might not be enough time and coming back from a GT car where you’ve got a lot of aids I thought it would take me a bit longer to adapt to the braking.

“By the end of today I found significant time even so I didn’t run another set of new tyres, so I’m really feeling quite confident as to where I’m at for Adelaide.

“Most of your time is found in the braking, which is what finally clicked today.”

Storey was the sole Eggleston runner at Winton, though he did share the rural Victorian circuit with a number of other Super2 competitors, including the full contingent of Garry Rogers Motorsport Commodores and Grove Racing, with which Eggleston has a technical alliance.

He was comfortable to rely on the baseline which had been established by his team-mates, including two-time Super2 Series winner Paul Dumbrell.

“I was the only Eggleston car; they just wanted to focus on me as a rookie and just bring me up to complete speed,” Storey explained.

“They’re running another two days next week, but I had good reference data from them being there last year and there were other guys there testing as well.

“To be honest the track felt really good and I put down some really good times today so I’m really happy.

The addition of Storey, who will drive the 2016 Bathurst 1000 winner, brings Eggleston’s Super2 line-up to four with the continuation of Dumbrell, Will Brown, and Nathan Morcom.

A total of 23 entries have so far been announced for Super2.