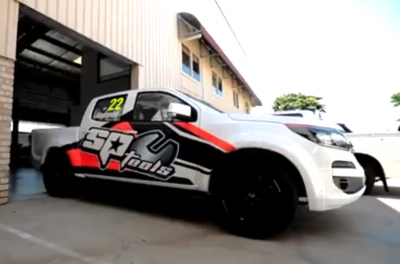 Ross Stone Racing and former SBR sponsor SP Tools have released footage of the Holden Colorado SuperUte which the team will campaign this year.

RSR will field young New Zealander Tom Alexander in the Colorado, which it will run alongside an Isuzu D-Max for former V8 Utes driver Steve Wilson.

SP Tools was a major backer of one of Stone Brothers Racing’s Supercar Falcons from 2008 to 2012, in the hands of Shane van Gisbergen, and remained for a year after the team morphed into Erebus Motorsport.

Ross Stone has also served as a technical consultant to Supercars on the SuperUtes development process, and worked on most of the six models which will take to the track for the inaugural ECB SuperUtes series, starting at the Adelaide 500 in March.

Development on the D-Max is ongoing but it is set to be tested for parity prior to the season-opener.