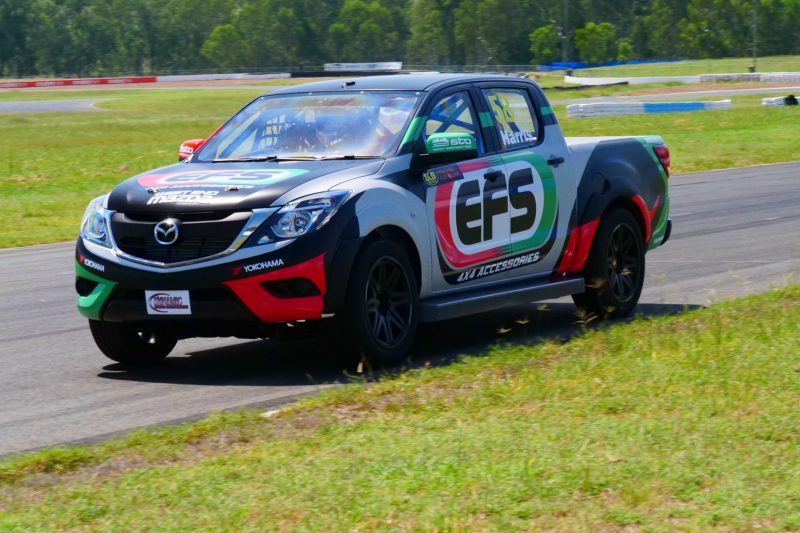 The look which three-time V8 Utes series winner Ryal Harris will carry in SuperUtes has been shown off at the category’s Balance of Performance test today at Queensland Raceway.

Harris and 18-year-old Aaron Cameron will each race a Mazda BT-50 with Peters Motorsport in the inaugural ECB SuperUtes Series, which starts at the Adelaide 500.

The BT-50 has already run around Queensland Raceway in recent weeks in the Bushranger colours which Cameron will run, before being re-skinned in the colours of Harris’ sponsor EFS for today’s test.

A second version is currently under construction.

Five of the six models which are being homologated for the first SuperUtes Series are in action for parity testing, including the first on-track running for the Toyota Hilux and Holden Colorado.

Steve Owen, Craig Baird, and Stephen Robinson, the latter of whom has experience driving the prototypes at Norwell Motorplex, have been cycling through each car before the competing drivers will have time on track.

“What Supercars are doing today is making sure all the different brands of utes are similar in performance so the racing is close so we see the same hard, door-to-door racing that ute racing is famous for,” team boss Brett Peters explained.

“When the public have a good look at these SuperUtes they will be impressed.

“Yes they have their own diesel engine and the same body and look as the road car, but they are most certainly real race cars in every other facet.”

“Having driven the BT-50 a couple of times now, I’m excited with what these things can do,” added Harris, who was one of the first drivers to publicly commit to SuperUtes upon the launch at Townsville last year.

“They are certainly lively to drive and when you consider they are already 15 seconds faster around QR than the road car, the sky is the limit in performance gains over the next few seasons.”

Peters’ EFS car is the second livery to be revealed in 24 hours after Ross Stone Racing showed off the Holden Colorado SuperUte it will campaign for Tom Alexander.

The opening round of the SuperUtes Series takes place on March 1-4.

Next Story VIDEO: SuperUtes on track at Queensland Raceway