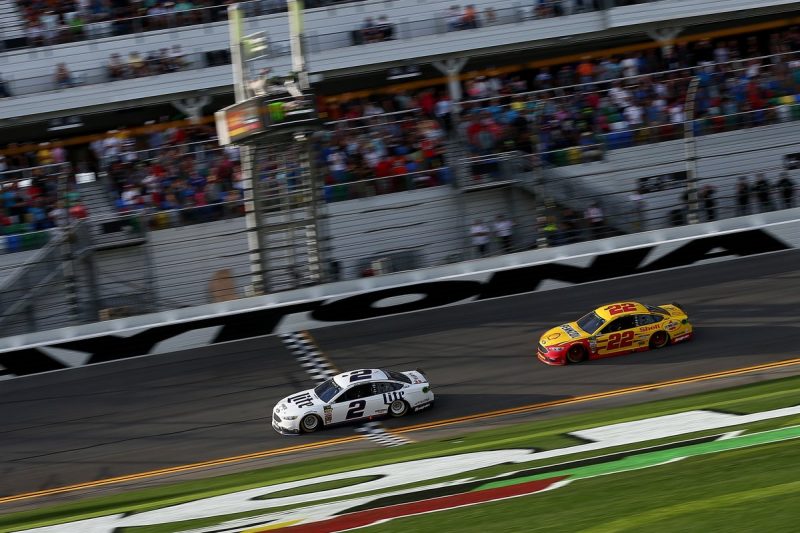 Brad Keselowski has come from last on the grid to lead Team Penske to a one-two finish in the NASCAR season-opening Clash at Daytona.

The Penske Fords locked out the top three for much of the last third of the 75-lap race, Keselowski leading Ryan Blaney and Joey Logano.

It was Logano who ended up second and Blaney fourth, with Kurt Busch in the #41 Stewart-Haas Ford the man in the middle.

Jimmie Johnson, however, crashed out of the Clash for the seventh year straight in a final-lap bingle.

Pole-sitter Austin Dillon, fellow front-row starter Denny Hamlin, and Chase Elliott all took turns in the lead early on before Logano moved into top spot just prior to the first Competition Caution on Lap 25.

Keselowski led Blaney away after the pit stop shuffle before an unscheduled Caution on Lap 34 when Jamie McMurray slapped the wall after the lightest of touches from Kurt Busch.

Elliott had the lead for the restart but Keselowski swept around him almost immediately, despite the former getting a push from Hamlin.

Keselowski was soon joined by Blaney, who helped keep his team-mate ahead of Martin Truex Jnr on Lap 43.

The race then developed into something of a holding pattern, with the field waiting until the very last lap to make their moves.

On the back straight, Kyle Larson gave Kurt Busch a helpful push but then nudged Johnson harder.

A second hit, perhaps due to contact behind from Kyle Busch, unloaded the #48 Hendrick Chevrolet and turned it into the wall.

Larson, who pulled off a huge save when he got loose on Lap 6, ultimately took 10th.

The Speedweeks continue on Thursday night (local time) with the two Duels.

Meanwhile, Dale Earnhardt Jnr’s replacement Alex Bowman has taken pole for Sunday’s Daytona 500, when he will start alongside Hamlin.