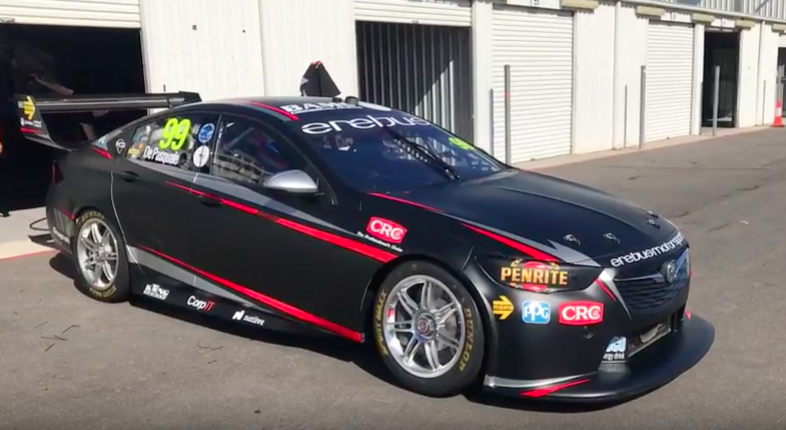 Erebus Motorsport successfully logged the first laps with its two Holden ZB Commodores despite a lack of parts at Winton ahead of this week’s official test at Sydney Motorsport Park.

The Melbourne team were able to complete the day with only one rear wing between the two chassis, as it awaits a final batch of parts from suppliers Triple Eight.

As a result, team manager Barry Ryan says the operation were forced to switch the rear wing from Reynolds’ car to De Pasquale’s after the former completed the permitted 60km shakedown of a brand new car.

De Pasquale, meanwhile, made use of a rookie day as he readies himself for a maiden Supercars campaign.

The team unveiled its new livery for Reynolds while his team-mate ran without a major sponsor on his Holden.

“It’s a credit to our incredible team of people at Erebus how our new cars have come together for today,” Ryan told Speedcafe.com.

“There has been a lot of conjecture about parts lately and to be honest it has not been ideal; we even had to share a single rear wing today between both cars and we don’t have one spare panel.

“Today’s test went incredibly well, Dave’s new car had a perfect shakedown and Anton had a very successful rookie day; everything and everyone performed faultlessly.

“As a team we have come a long way in a short period. From today forward all bets are off.”

Main game rookie De Pasquale felt the the day was beneficial in ironing out minor issues so he can concentrate on a full test program at Sydney Motorsport Park later this week.

“I have only ever done the one day in the old Commodore so it didn’t feel too much different,” De Pasquale told Speedcafe.com.

“The car felt really good, obviously having Dave (Reynolds) here was really beneficial as he understands a lot more than what I do.

“I think doing this puts me in good stead for Friday.

“We have got all the small issues and things we need to change out the way now, so we can just go there and concentrate on the program we have in place.

“It was a very productive day.”

The squad will now head to Sydney Motorsport Park on Friday.