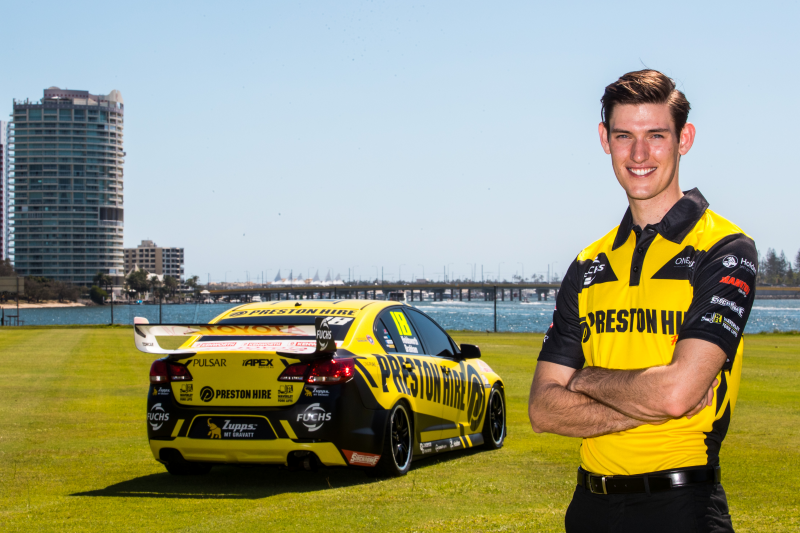 Matt Brabham is setting his sights on forging a career in Supercars after securing his first Pirtek Enduro Cup drive with Preston Hire Racing.

The 23-year-old sees touring cars as the next step in his career having been unable to make a full-time leap into IndyCar following his exploits at the Indianapolis road course and Indy 500 events in 2016.

Brabham, the grandson of the late triple Formula 1 world champion Sir Jack, will be offered a chance to show his potential to teams when he lines up alongside Lee Holdsworth for the three Supercars enduro events.

The Queenslander has spent the majority of his career climbing the single seater ladder in America but believes returning to Australia in search of a career in Supercars is his best hope.

Last year he made his Supercars debut when he joined Lucas Dumbrell Motorsport for a one-off drive at Perth in May.

“At the moment, with this opportunity, probably yes,” Brabham told Speedcafe.com, when asked if Supercars is the next direction of his career.

“We’ll just see how it goes.

“At this point I’m just focused on the enduros and just trying to learn and experience as much as I can and then think about the future stuff further on down the track.

“The focus is just trying to learn right now.

“At the end of the day I just want to try and make a living out of motor racing.

“It’s really tough in the US, but it’s tough every where.

“I have an opportunity here that’s come together that I’m extremely grateful to Preston Hire, Charlie (Schwerkolt) and Lee (Holdsworth) for having me on board and I’m looking forward to taking it with both hands and giving it a good run.”

Equipped with limited experience in touring car machinery, Brabham admits there is a lot to learn to get up to speed with the rest of the field come the Sandown 500 in September.

The Florida-born driver plans to spend more time in Australia this year to ready himself for the Pirtek Enduro Cup which will include several outings in the #18 ZB Commodore.

He is also keen to make appearances in Super2 to boost his mileage.

His first will arrive at on Friday at Supercars’ official test at Sydney Motorsport Park.

“I mean I’m not sure how long it’s going to take me,” said Brabham.

“It’s just one of those things (that) you don’t know until you get there.

“Obviously I don’t think I can jump in straight away on my first test day and set the world on fire.

“I’m going to take it slowly, build up to it and take my time and obviously keep it clean and learn as much as I can and get my relationships building with the team before everything starts.

“It’s such a unique driving style these cars require to drive.

“I think I can get up to speed but finding those extra last few tenths is going to be what the hardest thing is.

“I’m going to be trying to do everything I can do to get as many laps under my belt, as much testing and as much racing as I can to try and prepare.

“I’m definitely interested in trying to do something like that (Super2), it’s something we’re talking about and working on right now.”

Brabham says he will even consult with Holdsworth and IndyCar star Sebastien Bourdais, who previously contested the enduros in the #18 in 2015.

“Obviously I was team-mates with Sebastien at the Indy 500 and he’s a really great guy, along with Lee,” Brabham added.

“Lee’s one of the nice guys in the paddock and he’s always been there for me if I needed any advice, especially in Perth when I jumped in and he was one of the first guys who came up to me and offered help and whatever I needed to let him know.

“Sebastien’s definitely one I’m going to be talking to to try and get some advice.

“But he’s obviously always talked about the Supercars and the experience so I kind of already know what he has to say.”

Brabham will head to Preston Hire Racing for a seat fitting tomorrow.

The team is expected to run at Winton on Wednesday.

CLICK HERE for more from Brabham at the announcement.