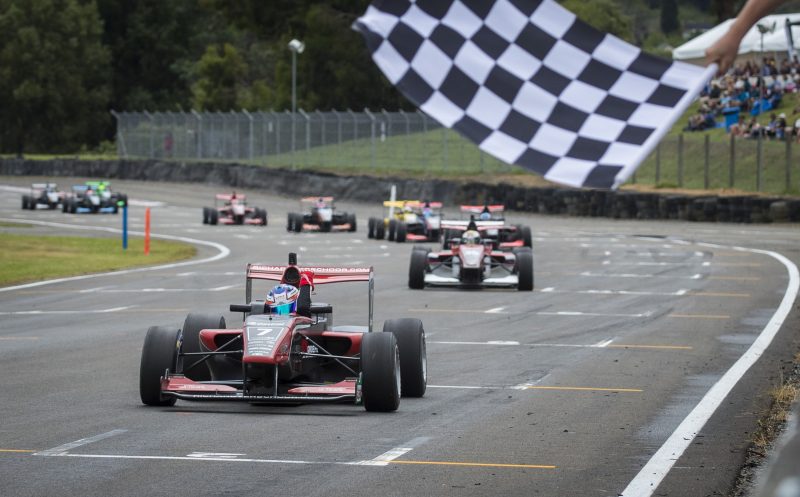 Robert Shwartzman has snatched the 2018 Castrol Toyota Racing Series title after previous leader Marcus Armstrong was swamped at a restart with one lap remaining in the season.

Armstrong had entered the season-ending NZGP at Manfeild needing to finish second to guarantee the series win.

He got the jump from the outside of the front row and led by around one second over Verschoor, who started the race third in the series, for much of the first 30 laps.

Milesi and Shwartzman meanwhile ran a distant third and fourth.

Verschoor got underneath Armstrong at Turn 1 on Lap 31, causing his M2 Competition team-mate to understeer off the circuit.

Armstrong nevertheless retained a series-winning position given that he quickly rejoined the circuit with a margin of several seconds back to Milesi and Shwartzman.

That buffer was wiped out when the Safety Car was called moments later due to Taylor Cockerton (Pukekohe) coming to a stop on the side of the circuit.

Cockerton’s car got snagged on a ripple strip during the recovery, with officials choosing to restart the race for a one-lap dash and the section in question protected by yellows.

The drama, however, came before that point when Armstrong’s car failed to launch at the restart and dropped multiple positions.

Shwartzman, crucially, gained one position to move into second at the same time, and there he finished the race.

The result gave Shwartzman the series by just five points over Verschoor, while Armstrong dropped to third in the standings having topped the points table since the end of Round 1.

“We had got to the last lap and I was disappointed there was not much I could do,” said Shwartzman.

“Then suddenly I finish second and I am the champion. It’s incredible. Amazing.”