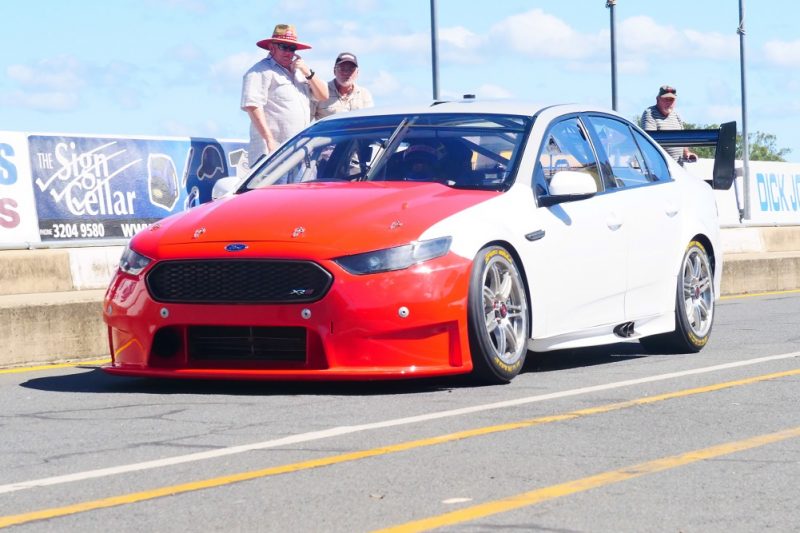 Fullwood and fellow new MSR driver Tyler Greenbury ended the week testing at Queensland Raceway, a day after Todd Hazelwood had his first hit-out in the other DJRTP FGX, which the team has bought to campaign in the main game.

However, with twin springs forbidden in the Dunlop Super2 Series, Fullwood says the change in specification presents a new challenge in tuning the Falcon.

“I’m really happy with how the day turned out,” the former MW Motorsport driver told Speedcafe.com.

“When a car comes from main game back into Super2, you can’t run the twin spring and there’s a few things that change.

“Because the car’s built around all that sort of stuff it takes a little while to figure out how to get it to go, so being the first car that Penske’s brought down into Super2, I was expecting it to be a little bit of a handful.

“But to be really honest, it came out of the box quite strong and we were really happy with the pace straight away.

“The car was handling well and I’m really happy with it.”

Fullwood has driven a variety of equipment in Super2, particularly in recent times, racing a VE Commodore with Paul Morris Motorsport, a pre-COTF FG Falcon with MWM, and then transitioning to a Nissan Altima midway through last season.

He said that the FGX has different traits to the ex-Nissan Motorsport Altima.

“You tend to trail the brake a long way into the corner with the car and it seems to really like that,” Fullwood explained.

“It seemed to pick the throttle up a little earlier than what I am used to and what the Nissan could take, so the car handled really well.

“There were a couple of things I had to get my head around but it was very comfortable straight away.”

Greenbury steps into Super2 from the unofficial third tier of Supercars, the Kumho Tyre V8 Touring Car Series, in the ex-Triple Eight VF Commodore which Hazelwood won the series with.

The Queenslander spoke glowingly of his first run in the car.

“I’m stoked with the day to be honest; we had a fantastic day,” he told Speedcafe.com.

“I had to learn the car at the start of the day and we did a few different braking techniques and stuff that I’d never really learned before.

“Bryce was probably about three tenths quicker than I was, which was good, and I’d never been on a green tyre before so I probably could have pushed a bit harder, but overall I was stoked.

“Honestly I’ve learned more today than I’ve ever learned before.”

The pair will return to Queensland Raceway for another test on February 20, when they will be accompanied by a number of other Super2 teams, before the series starts in Adelaide on March 1-4.