The aftermath of the first barrier test 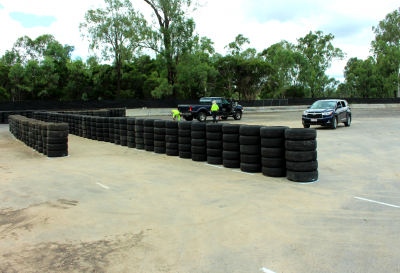 Queensland Raceway has conducted crash tests with its self-built barriers in a bid to prove they meet the safety requirements set by the Confederation of Australian Motor Sport (CAMS) and Supercars.

The operator of the Ipswich circuit and Lakeside Raceway has long pioneered the use of its own safety barriers that are currently not approved by the FIA or CAMS.

As a result, the circuit operates without a CAMS track licence and is only permitted to host Supercars once temporary tyre barriers are installed, which has been the case for the last three years.

Circuit operator John Tetley maintains that his COTA (chain of tyres assembly) barrier is highly effective and more than capable of meeting the required safety criteria.

Tests, featuring different degrees of track surface, were completed using a road car travelling at 122km/h, which was witnessed by a Supercars representative. The data gathered from the tests will be sent to CAMS.

The circuit’s place on this year’s Supercars calendar is subject to safety upgrades, costing up to $1 million, being installed to secure a Grade 3 international permit following the results of an FIA track inspection last year. Tyres are connected by steel plates which pivot upon impact

Tetley’s team has created two types of barriers to cater for a range of accidents.

A free standing row of tyres connected by steel plates, which pivot upon impact, and stood approximately six metres in front of a conventional tyre barrier was tested.

The design aims to wrap around the out of control vehicle to absorb the force of the crash and effectively slow down without lifting the car into the air, similar to effects of the FIA approved Tecpro barriers used in Formula 1.

“We want to prove to people that this barrier is very cheap, very easy to maintain and it meets the operational requirements of a day-to-day race track,” Tetley told Speedcafe.com.

“We also wanted to prove that it would do the job for road cars and race cars.

“The thing I hope they (Supercars) have taken away from it is that this barrier system does work and they have confidence in it.

“They do not approve the track it goes back to the FIA/CAMS and they in turn approve the safety furniture.

“We wanted some hard data. We have gone to the FIA safety committee twice and not had a reply. We believe that what we have developed should be shared.” The new barrier at Turn 1

The barrier has since been added to Turn 1 at Queensland Raceway to prevent drivers reaching the concrete retaining wall following a double fatality in August last year.

Tetley was impressed by the results of the tests and says one of the redeeming features of the barriers is the ease of construction and repair.

“Would I have liked to have been in that car when hit the wall, no? but you would have survived,” he added.

“If that (car) had gone into a concrete wall at speed you would have had a complete fatality. In this particular case there is no buckling on the floor of the car and the damage stops at the firewall.

“One of the issues we have in race meetings is if someone damages the safety furniture, the time to repair that is critical to the running of the event.

“All we have to do here is pull out the bit that is broken, put a new bit in and stand it up again.”

While hopeful the data will prove the safety standard of the barriers, Tetley says the upgrades recommended by the FIA continue to be in the hands of Ipswich City Council, CAMS and Supercars.

“We are not involved in that directly,” he said.

“It is up to the Ipswich City Council, CAMS and Supercars to come to an agreement on how they want to have the place set-up.”

Supercars teams Triple Eight and Tekno Autosports will head to the circuit today to shakedown four new ZB Commodores ahead of the new season.