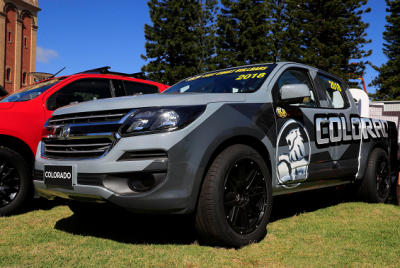 Morris had planned to run Holden Colorados in SuperUtes

Paul Morris has called off plans to field cars in this year’s inaugural ECB SuperUtes Series.

Morris had previously expressed an intent to run two Colorados in the series with Jonathan Bloxsom named as one driver and Morris himself potentially the other.

However, development of the six models which will initially feature in the series (Ford Ranger, Holden Colorado, Isuzu D-Max, Mazda BT-50, Mitsubishi Triton, Toyota Hilux) is still ongoing, with a Balance of Performance test set down for this coming Tuesday (February 13).

With the series commencing in Adelaide at the start of March, Morris and his customers have opted to sit out for the time being.

“We’re not involved in that program any more,” Morris told Speedcafe.com.

“I think for our customer base there just wasn’t enough final documentation within the regulations and the build of the cars to move forward.

“At the stage when we had to make a commitment, there weren’t any regulations.

“Rulebook and regulations didn’t exist, the parity hadn’t been completed, (and) all the normal basic criteria that you would require to make a decision about being in a category hadn’t been finalised.”

Despite the decision, the former Virgin Australia Supercars Championship driver and current Dunlop Super2 Series team owner said that he “believe(s) in the formula” and gave a strong indication of participating in future seasons.

“Yeah, for sure; I think a lot of people will,” he said when asked if he would consider entering in 2019.

“I think there’s a lot of people sitting on the sidelines and looking to how it plays out.

“They’re (category organisers) pushing on with it now and we’ll find out at Adelaide and obviously by the end of the year and I think there’ll be a lot more people wanting to get involved.”

Bloxsom has confirmed that he intends to compete full-time in this year’s Aussie Racing Cars series, again with Sean Rose Motorsport, but also left open the possibility of a SuperUtes campaign.

“We decided that we really wouldn’t have enough time with everything that we had on at Christmas to get things done and tested properly for Race 1 in March, so we’re probably going to just monitor it all,” he told Speedcafe.com of his SuperUtes plans.

“I still want to race utes; we might just buy one in the next few months and take our time and just do one of the later races in the year and get ready for next year.”

Aussie Racing Cars opens its season with the Baskerville Raceway 60th Anniversary meeting on February 23-25, while SuperUtes supports the Adelaide 500 on March 1-4.