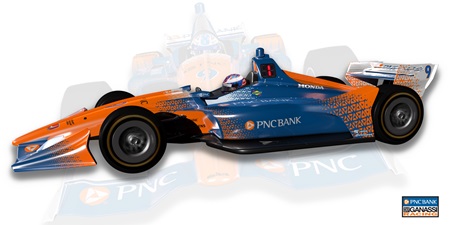 Chip Ganassi Racing has unveiled the car Scott Dixon will drive in this year’s IndyCar Series.

The four-time series champ will steer carry blue and orange PNC Bank backing in eight events during the 2018 campaign, including the Indianapolis 500 in May.

“Our racing team has enjoyed a formal relationship with PNC since 2013 where we have created opportunities to introduce our love of the sport of racing to PNC and their clients,” said team boss Chip Ganassi.

“Today’s announcement allows us to expand the fan experience at race tracks across the U.S. and take our two winning brands to a global viewing audience.”

Ahead of the IndyCar season starting in St Petersberg in March, Dixon was at the Leadfoot in New Zealand over the weekend.

Prior to that he was part of the GTLM class winning Ford GT lineup alongside Ryan Briscoe and Richard Westbrook at the Daytona 24.

Official pre-season testing gets underway in Phoenix on Friday, though Dixon is set to test a windscreen at ISM Raceway tomorrow.