Youlden proud to mix with GT3 elite at Bathurst

Youlden proud to mix with GT3 elite at Bathurst 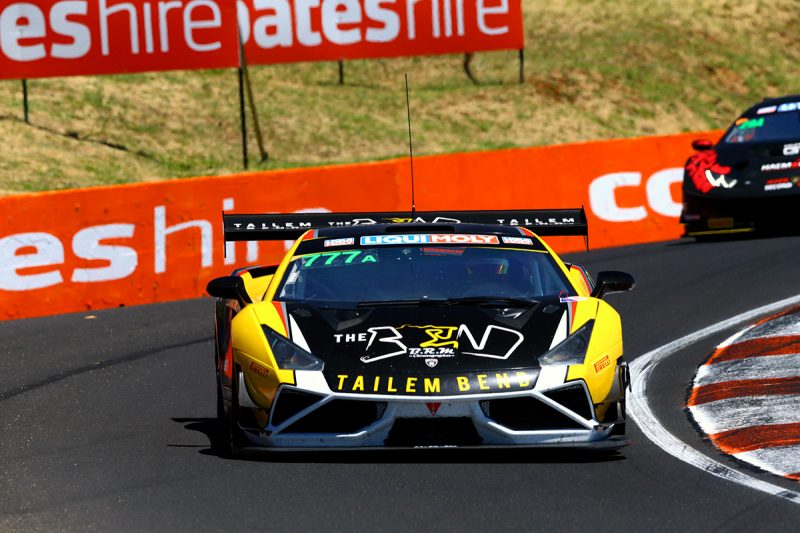 Luke Youlden is proud of himself and his Bend Motorsport Park team for challenging far more fancied factory entries before an unfortunate retirement at the Liqui-Moly Bathurst 12 Hour.

Youlden had been genuinely competitive in an older, Pro-Am class Lamborghini Gallardo which he was sharing with car owner Yasser Shahin and Tomas Enge.

The #777 Lamborghini was particularly fast up Mountain Straight, allowing Youlden to mix it with and pass far more fancied Pro factory entries.

He qualified fourth and was running third when contact with Aaron Zerefos while trying to lap the Class B Porsche on the run to The Cutting saw the team lose multiple laps in pit lane to fix the damage on the left-rear corner.

“We came here not expecting the pace we had,” Youlden told Speedcafe.com.

“I came here thinking that we’d probably sneak into the (top) 10, hopefully, if everything went well, and we exceeded our expectations in qualifying.

“Obviously the shootout lap was pretty cool and it was a good start to the race; it was fast, a genuine third on pace.

“A lapped car just didn’t respect that I was there and that broke the rear shock.”

While Youlden said the crew was lucky to escape with only a snapped shock absorber, there was further trouble when he returned to the track later in the race when the car lost a wheel, only for gearbox problems to ultimately end their race.

The 40-year-old, who did not hit a wall in the second incident despite suspicions when the wheel parted company, still drew on positives from the day.

“After the dramas we had, when I fed back out there the leaders were holding me up and I was in a tricky situation as to whether you let them go or do you sneak past?

“That was cool to be able to mix it with the leader pace and I think we can be proud of what we achieved.

“Obviously we didn’t quite get the result in the end but the car was fast and drivers were fast, and we’re sort of happy.”

The performance came just inside four months since his and David Reynolds’ breakthrough Supercheap Auto Bathurst 1000 win in the underdog Erebus Motorsport operation.

Youlden earned plaudits after that Sunday in October and also his drive particularly in qualifying for the Sandown 500 a race prior, and once again in the 12 Hour.

“I’m rapt,” he declared of the set of performances.

“I think winning that race (Bathurst 1000) changes your life, definitely.

“It gives you confidence, and I think when you’re in a bit of a rhythm and a flow with winning and being competitive, it just sort of happens for you, so I can’t really explain it.

“Unfortunately I haven’t had too many opportunities in these cars because they sort of label you as a Supercars driver and don’t give you the opportunity.

“I think GT teams from around the world, and you can see with Chaz (Mostert) now doing a lot in Asia, maybe should be looking towards Supercars guys a little bit more.”

The #777 Lamborghini ultimately succumbed half an hour before the race-ending red flag, having completed 219 laps.