Home » News » Formula 1 » Webber: Ricciardo should focus on Verstappen instead of 2019

Webber: Ricciardo should focus on Verstappen instead of 2019 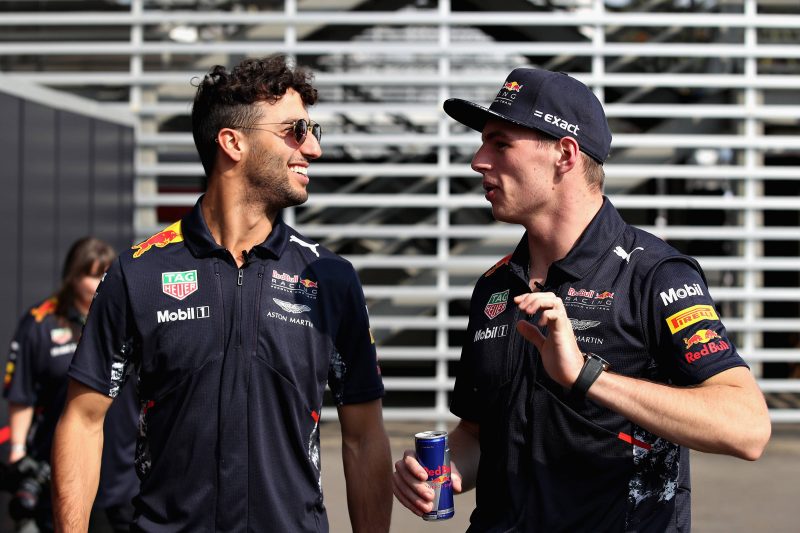 Daniel Ricciardo should focus on beating Red Bull team-mate Max Verstappen this season rather than his crucial call on his 2019 Formula 1 plans, according to Mark Webber.

The Red Bull star is out of contract with the Milton Keynes-based team at the end of the season and is a key player in the make up of next year’s driver line-ups.

Ricciardo has stressed that his next contract decision has ‘a lot at stake’ for the future of his career as he aims to find himself a competitive car to challenge for a world championship.

The Australian could be presented with options to join Mercedes or Ferrari given Valtteri Bottas and Kimi Raikkonen have inked only one-year extensions at their respective teams.

However, former Red Bull F1 driver Webber believes Ricciardo should keep his mind set on beating Red Bull’s emerging talent Verstappen rather than concerning himself with his future contract decision.

“I think the best thing he can do is beat Max,” said Webber during a visit to support Porsche at the Liqui-Moly Bathurst 12 Hour.

“Which he knows, and he’s going to do his best to do that.

“He wants to try and have a crack at that for five or six months, then look at the options.

“I don’t think Mercedes will be rushing to make a decision either, they’re going to keep a good eye on Valtteri and see how he’s performing, probably until Canada.

“There’s an obvious link – they’re both out of contract, he’s a top-flight driver and there’s a chance for a switch.

“But if he’s beating Max and Red Bull are flying again, why would he leave?

“At the end of the day, I don’t think Dan’s too bothered what colour the car is.

“He just wants to win. That’s what he’s aiming to do, and it’s hard to win consistently.

“He’s totally capable of it, but he’s just got to find himself in a position where he can get that opportunity.”

Webber is well versed in the politics at Red Bull following his tumultuous time alongside Sebastian Vettel.

There are similarities between Ricciardo and Webber’s careers at Red Bull, with the pair both going up against rising stars as team-mates.

However, given Ricciardo and Verstappen are both products of Red Bull’s junior program, he feels the former will be offered sufficient support at the team.

“Red Bull will support the guy that’s leading the championship and doing the business,” Webber added.

“If that’s Daniel, I reckon he’s still in great shape there, to be honest.

“Because he is a Red Bull product. I don’t think Helmut would be disappointed to see Daniel as world champion, but he loves Max as well. They’re both his favourite guys.”