The Supercars co-driver is expected to return to his Brisbane home today after emerging from a sickening three-car crash in the closing stages of Sunday’s race with only severe bruising and a wound on his elbow.

Walsh was transferred to Orange Hospital after his #69 Audi found the wall while trying to lap the #95 MARC Cars entry driven by Bryce Fullwood with 20 minutes of the race remaining.

The 30-year-old then suffered a secondary heavy impact when an unsighted John Martin (#19 Mercedes-AMG) slammed into the passenger side of the stricken R8, which prompted officials to red flag the race.

While doctors cleared Walsh of any broken bones and internal injuries, he underwent surgery yesterday for a deep cut that exposed the bone and tendons in his elbow. 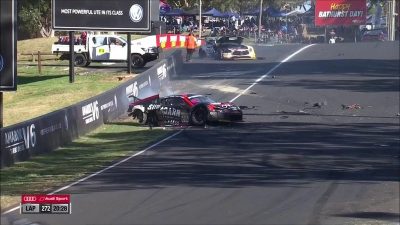 The aftermath of the race ending shunt involving Ash Walsh

The race was his first since recovering from fractured ribs and a punctured lung after a testing crash that ruled him out of a drive at the Supercheap Auto Bathurst 1000 and Gold Coast 600.

“It was incredible to have that happen in my first race back (from injury),” Walsh told Speedcafe.com.

“I feel really lucky, first of all that it is a left-hand drive car and that I ended up on the other side of the car facing that way.

“It could have been a hell of a lot worse.

“I got cleared of a punctured lung and broken ribs so I think it is just a bit of cartilage damage and some bruising.

“In that respect I don’t feel too bad.

“I had to get surgery because I hit my arm in the crash and split my elbow down to the bone. I had to get it scrubbed out and sewn back up again.

“There is no reason why I shouldn’t make a full recovery.

“I think it will be a lot quicker than last time and within a month I will be good to go again.”

In a bizarre twist Walsh and the #69 crew of James Koundouris, Theo Koundouris, and Duvashen Padayachee claimed the GT3 Am class win as results were backdated following the red flag. His co-drivers presented him with the trophy while he was being checked over at the Mount Panorama circuit medical centre before being taken to hospital.

“It was completely bizarre. I couldn’t believe it that the guys came into the room, before I went to the hospital, with the trophy,” he added.

“I couldn’t work out how we won it, but the race was red flagged and we won on count back.

“It is really cool for the guys. We spent the entire race leading the class and we were punching above our weight a little bit.

“It was good to get that reward and for the race to end that way with a victory.”

Walsh says he vividly remembers the accident and believes there is nothing Martin, who was released from Bathurst Hospital without serious injury, could have done to avoid him.

Martin apologised for the clash on social media on Monday.

“I remember everything, I was following (Jamie) Whincup for a while and he went through a corner before on the MARC Car, and I went up the inside of the car and I didn’t think much of it, and I thought I was by him already,” Walsh added.

“I don’t know if he misjudged the turning or something but it clipped the back of the car and it sent me into a spin and I bounced back onto the racing line.

“I was sitting there and I obviously couldn’t move the car and I saw people come around pretty fast and I don’t know if they had (yellow) flags out.

“When I saw John come round he was not going to be able to get out of it, but I think he did a really good job to avoid it as much as he could.

“He (John) has got nothing to be sorry about. If someone is sitting on the track there, there is nothing you can do about it.”