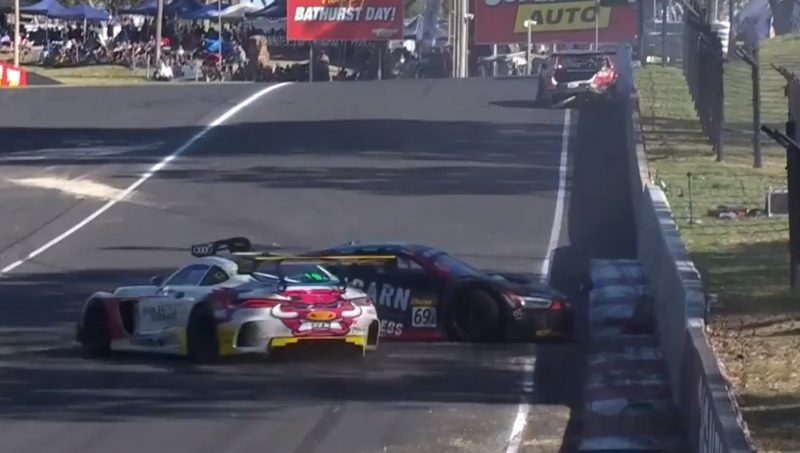 The moment of impact between John Martin and Ash Walsh at the Bathurst 12 Hour pic: 7mate

Drivers have called for improved safety measures across the top of the Mount Panorama circuit following the race-ending crash in Sunday’s Liqui-Moly Bathurst 12 Hour.

A heavy crash between Ash Walsh, Bryce Fullwood, and John Martin saw the red flag shown and the race declared early, with both Walsh and Martin taken to hospital for further checks.

Martin was discharged on Sunday night, while Walsh yesterday had surgery on a deep cut to his elbow and is due to return to his Brisbane home today.

However the incident has prompted drivers to voice their concerns, and make calls for improved safety across the top of the circuit.

“I can’t believe we haven’t learnt after previous situations there,” 2009 and 2016 Bathurst 1000 winner Will Davison tweeted.

“Such a scary situation for both parties, something we all fear. NEEDS to be improved immediately. Unmissable & instant lighting on both sides.”

An experienced sports car racer, Martin has two LMP2 Le Mans starts under his belt, and finished third in the category in the 2016 World Endurance Championship.

He agrees that the implementation of a lighting system, either on track or in the cars, would go a long way to improving driver safety in that part of the circuit.

“It’d be nice if they sort of implemented that into these sort of cars. It all helps, really.

“I don’t want to blame anyone. Obviously without the flaggies we can’t go racing,” he added.

“I know they’re volunteers and all that, but at the same time there’s a job to do and in places like that where you can’t see you rely on every little bit of information that you get for any sort of warning.

“In that part of the track, it’s pretty sensitive.

“If you see anything you know that if there’s a yellow in that situation, on that part of the circuit, or anywhere along there really from the Cutting pretty much to the Elbow, there’s nowhere for a car to go, so it’s got to be on the track (and) so you roll out of it.

“I’d like to think anyway if there was a yellow or something there then you’d be definitely at 50 percent pace – at even 50 percent pace you’ll still be rolling through there pretty quickly but you’ve got heaps of grip in hand and you would have been able to miss it.

Meanwhile, the Confederation of Australian Motor Sport (CAMS) has told Speedcafe.com that stewards reviewed the incident.

The body claims the officials followed the ‘correct procedure’ and that matters regarding to track safety will always be investigated.

“CAMS can confirm that its officials followed correct procedure at Bathurst on Sunday,” read a statement issued to Speedcafe.com.

“We constantly review track safety to ensure circuits meet strict safety standards and as part of that, we will always review any incident and the surrounding circumstances.

“We will continue to work with the FIA and the track operator to ensure these high standards are maintained.”

The run from Sulman Park to McPhillamy Park has been witness to several high profile incidents over the years, including the death of Mark Porter in 2006, and a heavy clash between Paul Weel and Chris Pither during practice for the 2008 Bathurst 1000.

FIA track inspector John Symes visited Mount Panorama as part of its triennial inspection required to maintain its license, though significant improvements were only recommended at Sandown and Queensland Raceway.

In its 80-year history, the only significant change to the circuit has been the addition of the Chase in the late 1980s, though the wall at Skyline has been pushed back to allow for a gravel trap.

A major crash has brought out the Safety Car at the #B12HR pic.twitter.com/5rhMCSB8xU