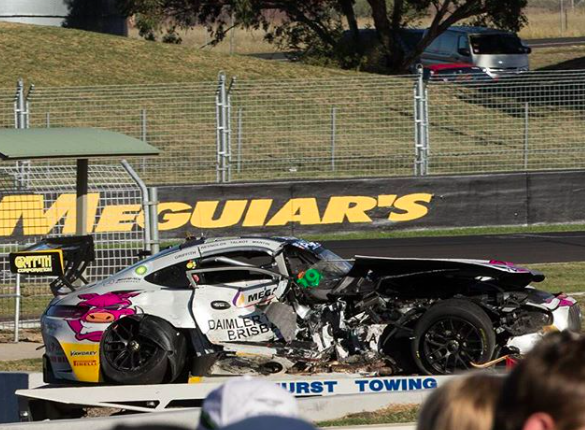 Australian GT driver John Martin says he did everything he could to avoid a horror crash with Ash Walsh in the closing stages of the Liqui-Moly Bathurst 12 Hour.

Martin, driving the #19 Mercedes-AMG, smashed into the passenger door of Walsh’s stricken #69 Audi at McPhillamy Park with 20 minutes of the race remaining.

Walsh had found the wall just moments earlier and was left broadside in the middle of the track before an unsighted Martin entered the section of track.

The incident saw officials red flag the race with 12 minutes on the clock.

Both drivers were transferred to hospital for checks after visiting the circuit’s medical centre.

Martin was released from Bathurst Hospital last night and is sore from the violent impact from the incident.

Meanwhile, Walsh was taken to Orange Hospital with suspected broken ribs and a punctured lung.

“Not the way we wanted to finish the @bathurst12hr,” read a post on his social media.

“We had our share of issues during the race with a tyre failure and a brake issue half way through but we were still going ok till the race ending shunt.

“Really gutted for all the guys @liamtalbotracing @daffidreynolds Griffo (Mark Griffith), @trent749 and all the guys working on the car.

“Also sorry to my mate @ashwalsh45 I did all I could to miss you, I feeling sore today I can only imagine your worse.”

The entries involved in the clash were classified finishers due to the red flag backdating the results.

The #69 driven by Walsh, James Koundouris, Theo Koundouris, and Duvashen Padayachee claimed the GT3 Am class in 10th overall.