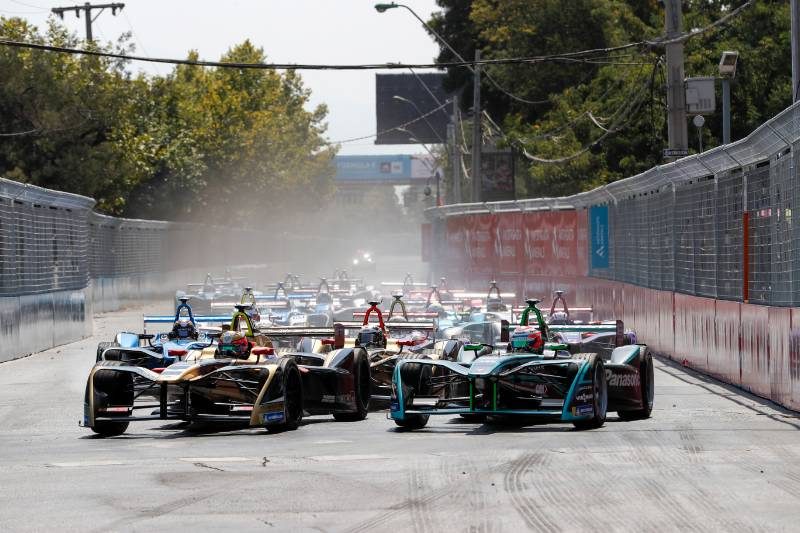 Jean-Eric Vergne fends off Nelson Piquet Jnr at the start

Jean-Eric Vergne has headed a Techeetah 1-2 ahead of team-mate Andre Lotterer at the Santiago ePrix.

Starting from pole, Vergne headed the field from the off despite a challenge from the fast-starting Nelson Piquet Jnr.

The Jaguar driver made an early challenge for the lead, before the Safety Car emerged for two separate incidents on the opening lap for Jose Maria Lopez and Maro Engel.

At the restart, Vergne edged away from the field, maintaining top spot until the flag.

However he came under pressure in the back half of the race, when Lotterer found a way through on Piquet before chasing down Vergne, who’d been forced to slow with radio problems.

There was a similarly dramatic battle for the final podium position, with Sebastien Buemi getting the batter of Piquet, who slipped to sixth at the flag.

Lucas Di Grassi retired shortly after his mid-race pit stop, the race notable for the first not to mandate a minimum pit stop time.

The result sees Vergne extend his championship advantage after four races over Felix Rosenqvist, who ended the race fourth.

Formula E stays in the Americas for the next event, heading to Mexico City on March 4 for the fifth race of the 2017/18 season.