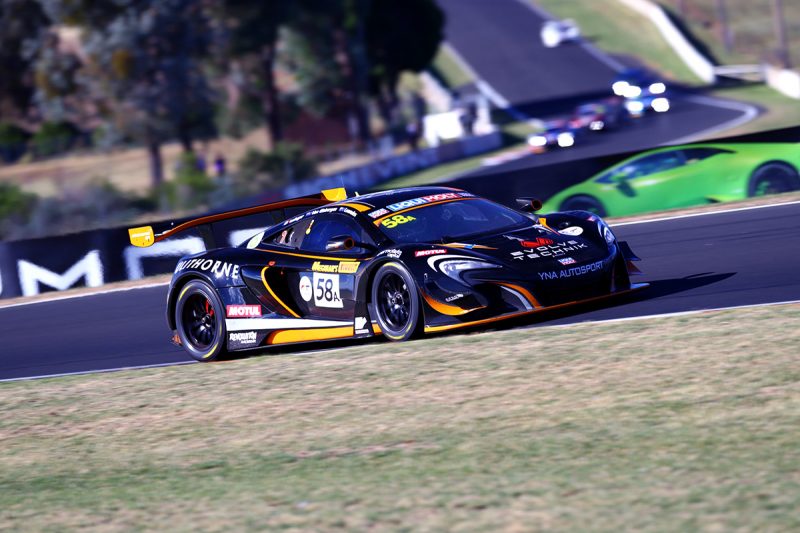 Despite the combination comprising winners of the last two editions of the Mount Panorama race and a French McLaren specialist, the #58 650S had not fired a serious shot in two days of practice and qualifying.

Starting eighth on the grid, the car gradually rose as high as fourth on merit around the 90-lap mark before dropping like a stone in the hands of Lowndes.

The two-time Bathurst 12 Hour winner lost all straightline pace and pitted from an effective 13th on Lap 101.

The issue in the McElrea Racing-run McLaren was diagnosed as overheating which caused the engine to deliver less power and consume more fuel.

Van Gisbergen brought the entry back onto the circuit four laps down, the car was soon retired.

“When it overheats it retards the engine and loses a whole heap of power, so in my second stint it started to do that.

“We thought we could try and get some fresh air and sort of get it under control but unfortunately it didn’t, so they bled the system again which I think everyone saw.

“It seemed to help a little bit but then Shane said he encountered the same problem and they brought it in.

“It looks like more of an underlying issue than that, whether it’s a head gasket or something else, so it’s a bit disappointing.”

Lowndes also confirmed that the issue only began to manifest itself during his second stint of the race, after the promising start.

“The first stint was okay I think,” he recounted.

“In the second stint we were able to slipstream up behind the Mercedes and then all of a sudden I got to the point where we couldn’t do anything.

“Then all of a sudden we were falling away and everyone was passing us in a straight-line.

“These guys (McElrea Racing) are obviously well aware of it, they could see it on the data, and were monitoring it.

“We were circulating but well below the speed that we should be.”

Lowndes and Ledogar had both been adamant that there was more time to come from the #58 McLaren after a lacklustre Friday, and they were proven correct when van Gisbergen earned a shootout berth.

Ledogar held steady in the opening stint and rose slightly when he continued in the car, before Lowndes gained more positions when he too double-stinted.

He then lost three positions on Lap 92 alone, including two down Conrod Straight, and retreated to pit lane nine laps later.

“A little bit frustrating,” Lowndes said of the weekend, “not necessarily the car side of it, more just the practice sessions being cut short and everything else.

“We really never got into a rhythm or did anything else, so that was probably more of a frustrating side of it, but we knew the car was reasonably right.

“I think it showed that through the qualifying, Shane did a good job in the Top 10 Shootout and then Come did a great job on the start of the race, so the car was easy to drive.

“I think we would have been there or thereabouts at the end if we hadn’t had our issues.”

The trio were ultimately classified second-last in Class A Pro with 119 laps in the books, 98 short of the next-highest non-finisher in the form of the Schnitzer BMW M6 which Chaz Mostert drove.