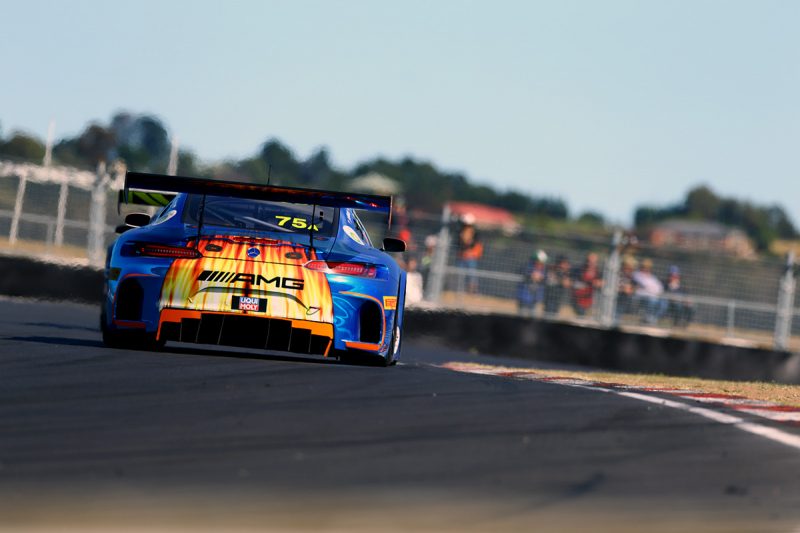 The SunEnergy1 Mercedes-AMG leads the Liqui-Moly Bathurst 12 Hour heading into the final quarter of the race at Mount Panorama.

Despite taking more than twice as many pit stops as the majority of its rivals, the Raffaele Marciello/Jamie Whincup/Tristan Vautier/Kenny Habul car climbed to the lead.

Audi’s charge was halved with the #74 R8 of Christopher Haase the last of the brand in with a chance of victory.

The sister car of Kelvin van der Linde hit trouble when the South African found the wall while trying to pass a backmarker.

Bentley moved into third courtesy of Steven Kane in the #17 ahead of the #991 Porsche of Kevin Estre and Chaz Mostert in the #43 BMW Team Schnitzer.

The seventh hour began with two Safety Car periods in quick succession with the first caused by a stricken Daytona Viper at Reid Park and a fiery incident for Paul Morris in the #54 MARC entry at The Chase.

Flames licked the front of the car which forced Morris to pull over and quickly extricate himself from the car before combination of a Morris and a marshal put out the fire.

This handed Romain Dumas the lead in the #911 Manthey Racing Porsche from the #17 Bentley of Jules Gounon.

Racing continued for barely a lap before the Safety Car was introduced again, this time for a serious crash involving the #88 Ginetta.

The car was slammed into the barriers at Grffins Bend after contact from the #21 Class B Porsche of Sam Fillmore, which warranted a five minute penalty from the stewards.

This prompted yet more action in pit lane with the top two entering the lane which saw Cameron Waters (#55 Strakka Racing Mercedes-AMG) inherit the lead from Markus Winkelhock, who took over the #74 Audi.

Stuart Leonard held third in the #37 Audi ahead of the SunEnergy1 Mercedes-AMG, driven by Tristan Vautier.

Waters opened up a lead at the front until the race was neutralised for a 12th time when the Daytona Coupe stopped at The Cutting, triggering yet more stops for the lead group.

One of the key contenders for the race hit trouble 10 laps after the restart when van der Linde swiped the wall at The Dipper while trying lap Bryce Fullwood (#95 MARC Cars).

Significant damage to the left rear saw the car, which was second at the time, spend time in the garage, before returning to the race 29 laps off the pace.

A 39 lap run of green flag running, the longest of the race so far, followed with Marciello leading Haase (#74 Audi), Kane (#17 Bentley), Estre (#991 Porsche) and Chaz Mostert who jumped back in the #43 pole-sitting BMW.

As the race reached the 10th hour there were 12 cars on the lead lap.

Grove Racing had a one lap lead in Class B, while four laps separated the Class C leading Boat Works BMW.

The Invitational Class was headed by #93 MARC Cars entry.