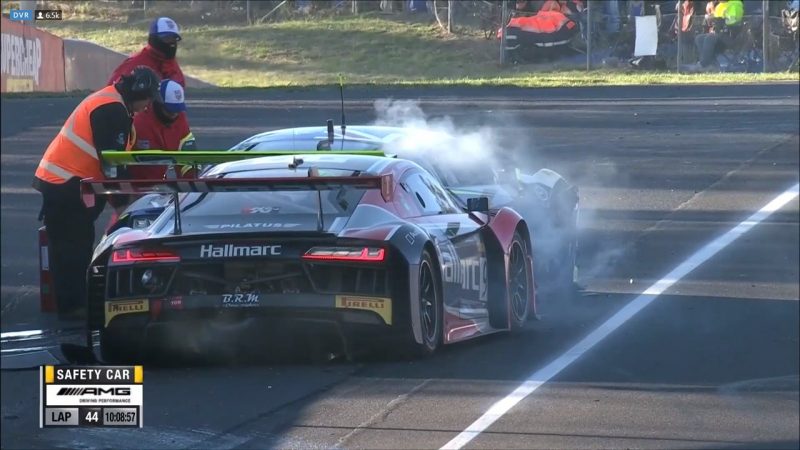 The aftermath of the Andrew Bagnall incident

UPDATE: Experienced New Zealand driver Andrew Bagnall has been hospitalised following a nasty crash in the early stages of the Liqui-Moly Bathurst 12 Hour.

Bagnall found the wall at McPhillamy Park in the #82 International Motorsport Audi after 43 laps of the race, which prompted a significant stoppage.

It triggered a multi-car crash that also accounted for the repaired #9 Audi Sport Customer Racing Australia entry of Marc Cini, and the hapless Morgan Haber (#67 MARC II), who found his road blocked as Cini slowed to avoid the incident.

The Safety Car was deployed for eight laps as crews worked to extract Bagnall before clearing the two wrecked Audi R8s.

The 70-year-old was expected to be flown to Westmead Hospital, Sydney for checks on neck and chest injuries, but organisers have since confirmed that he will be transferred by road to Orange Hospital.

Bagnall was conscious and lucid according to International Motorsport team manager Nick Williamson when he was being treated in the circuit’s medical centre.

He is due to be flown to Westmead Hospital, Sydney for further checks on suspected neck and chest injuries.

“Andrew is breathing, talking and lucid that is the main thing,” Williamson told Speedcafe.com.

“That is the main thing. It is a tricky one and it is massively disappointing.

“The medical team here has done a bang up job and they are just going through all the procedures.

“No doubt he will end up going to hospital given the size of that shunt.”

Meanwhile, Lee Holdsworth was left frustrated after his race came to an early end.

The Supercars driver had hoped to repay the Audi Sport Customer Racing Australia team for repairing the car last night after his crash in qualifying on Saturday.

“Looks like that is us done for the weekend. It looks like someone behind ran into him and took him out,” Holdsworth told Speedcafe.com.

“Unfortunately I’m just too used to going home early from this place.

“It would have been really nice to reward the guys for their hard work and give them a result but that is motorsport.”

The #48 M Motorsport KTM, driven by David Crampton, has also retired from the race following heavy contact with the wall on the way down to Forrest’s Elbow.

The incident caused the second Safety Car while the first stoppage occurred when Jon Goodacre spun the #96 MARC entry on the warm lap.