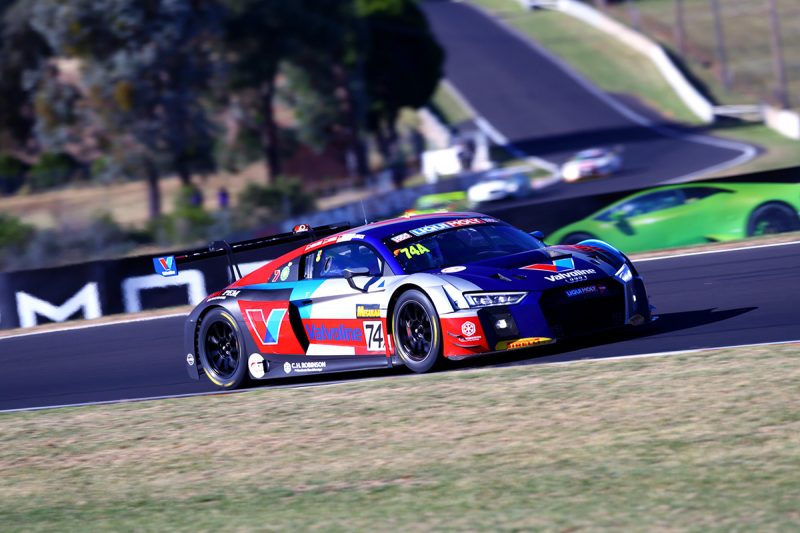 The #74 Audi leads the Bathurst 12 Hour at halfway

Audi has taken command of the Liqui-Moly Bathurst 12 Hour at the halfway mark after BMW Team Schnitzer were slapped with a drive-through penalty.

Christopher Haase moved into the lead shortly after the ninth Safety Car restart following a pass on the sister #22 Audi entry piloted by Garth Tander.

A strong stint for Steven Richards and Philipp Eng helped the BMW Team SRM entry, that started from the back of the grid, into third.

There were 12 cars on the lead lap after six hours of racing.

The race stoppages continued into the fourth hour when the #3 Audi Sport Customer Racing Australia entry slammed into the wall at Hell Corner.

Ash Samadi was at the wheel when the car left the track and found itself beached in the gravel minus a front right wheel.

Meanwhile, the repaired Buik Motorworks Lamborghini rejoined the race after its incident in the opening three hours, albeit 14 laps down.

Tim Slade in the Objective McLaren led on the race restart from but green running was short-lived when a loose wheel from the #65 Daytona Coupe sparked a sixth Safety Car period. The car sheered an axle.

The restart produced the first moment of drama for the early race leaders Schnitzer Team BMW.

Wittmann was adjudged to have breached the Safety Car restart rules for overlapping, triggering a drive-through penalty.

The two-time DTM champion dropped to the fringes of the top 10 after taking the penalty on lap 81, shortly before another Safety Car period.

Maxime Soulet in the #18 Bentley, which had suffered a gearbox issue earlier in the race, encountered a scary right front tyre failure at The Chase, which prompted the stoppage.

Leader Slade pitted from the lead which saw Steven Richards take over the advantage in the #100 BMW Team SRM M6 GT3 that started from the rear of the grid after an exclusion from qualifying.

This handed Steven Kane in the #17 Bentley the lead, only to be penalised for a Safety Car restart breach, dropping it down the order. The car would take another stop shortly after.

Competition Motorsports took over the lead courtesy of Patrick Long, who ran a sizeable stint where he led from Jamie Whincup, who managed to haul the #75 SunEnergy1 Mercedes-AMG up the order.

Further down the pack, Craig Lowndes began to significantly lose pace in the #58 YNA Autosport McLaren that eventually saw the car roll into the garage and return with Shane van Gisbergen four laps down.

Lowndes had been positioned in the back end of the top 10 before the overheating dramas intensified.

An eighth Safety Car, caused by a spinning #23 Class B Porsche at McPhillamy, triggered another round of pit stops.

Once the stops played out the #22 Audi of Garth Tander emerged in the lead from the sister #74 Audi of Christopher Haase with Raffaele Marciello third after taking over from Whincup.

Haase soon took the lead from Tander after the restart.

The #55 Strakka Racing Mercedes-AMG produced solid stint to haunt the entry into fourth before handing over to Cameron Waters and has now dropped to 11th spot.

It pitted along with the Marciello Mercedes-AMG and the #17 Bentley under a ninth Safety Car when #13 Class C BMW stopped at Reid Park.

The dramas continued for the #58 McLaren as van Gisbergen brought the car back to the garage to allow the team to combat an ongoing overheating issue.

Solid stints from Laurens Vanthoor, Estre and Earl Bamber assisted the Craft Bamboo Porsche’s rise to fourth ahead of the Competition Motorsports Porsche, who passed the Manthey Porsche lying sixth.

The top 10 was completed by #540 Black Swan Racing (Porsche), #17 Bentley and the SunEnergy1 Mercedes-AMG.

Class B is led by Grove Racing, Class C is headed by The Boat Works BMW, while the Invitational class is topped by the #91 MARC entry.