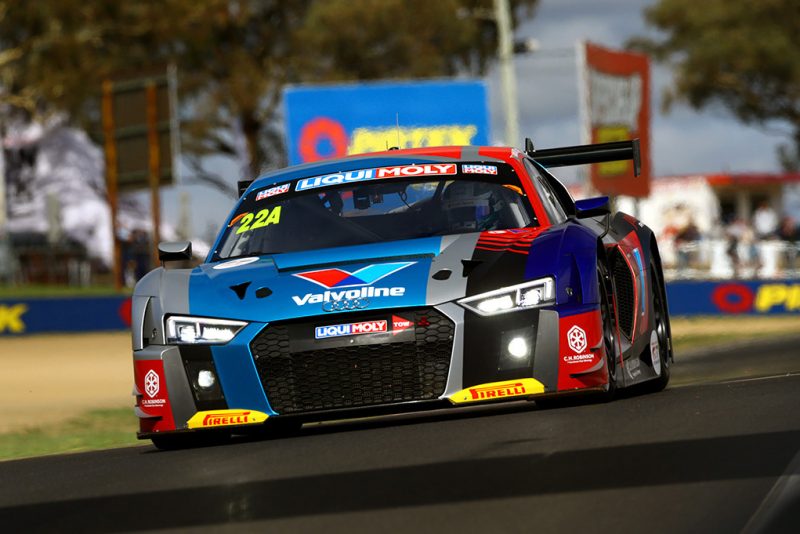 Van der Linde was the last driver on track for his one-lap flyer in the #22 Jamec Pem Racing Audi R8 LMS and ultimately secured second position on the starting grid for the Liqui-Moly Bathurst 12 Hour.

While the 21-year-old South African and the other member of the #22 trio, Frederic Vervisch, are Audi factory drivers, neither had ever driven around Mount Panorama prior to this weekend.

With van der Linde chosen to steer the R8 for the shootout, he faced another new challenge in the form of a one-lap qualifying effort, which is rare in world sportscar racing.

“It’s just small things, small track details that he can brush up on,” van der Linde told Speedcafe.com when asked what advice Tander provided, “especially like how going into the shootout the track conditions change and what to expect.

“It’s just kind of calming the mood and it’s good to have him there.

“What I really liked about our team this week is that there were no egos involved.

“It was really a tight team and we worked well from the outset, which is very, very positive.”

Van der Linde had edged Chaz Mostert to provisional pole by 0.029s in Qualifying 2, and their respective shootout laps were similarly tight to the second sector.

The Audi had less than 0.1s on the Schnitzer BMW exiting Forrest’s Elbow, but came up 0.2s slower.

Van der Linde revealed that he had a nervous run into The Chase which caused him to take a conservative approach to Murray’s in finishing off the lap.

“It was in The Chase, going into the left-right,” he said where the time was lost.

“The car was very edgy there and a few cars struggled actually, so I guess the track conditions there were maybe a bit compromised.

“I had a big oversteer moment there and then the last corner obviously having that oversteer moment, not really trusting the right-rear, I decided to brake a bit earlier, which is probably that last tenth or two, but anyway that’s how it is.”

Vervisch is set to start the car when tomorrow’s Bathurst 12 Hour starts at 0545 local time/AEDT.