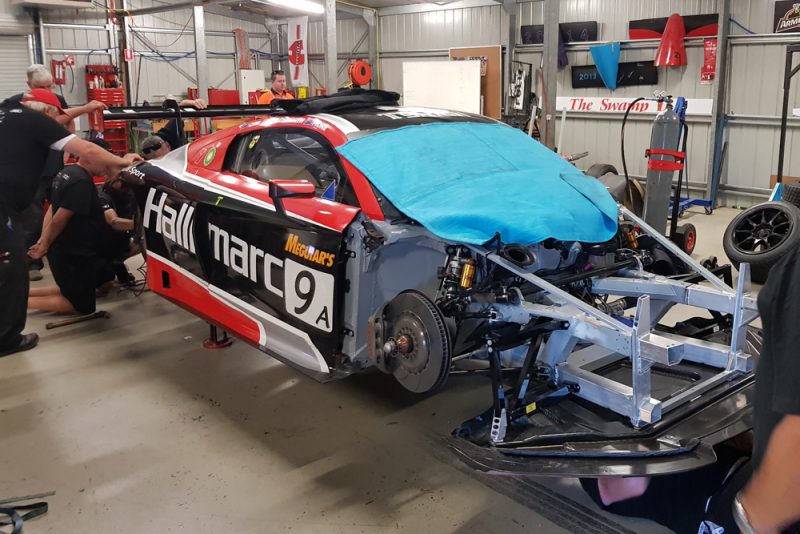 The Audi R8 LMS found the wall at the exit of Griffins Bend, sustaining heavy damage as it nosed into the barrier, spinning Holdsworth 360 degrees in the impact. 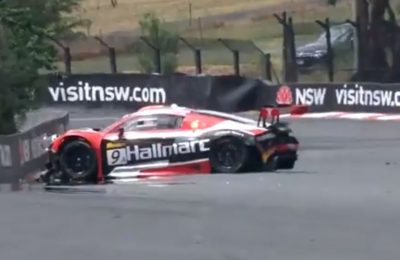 It drew a red flag midway through the 30-minute Class A qualifying session and threatened to end the squad’s weekend early.

“It needed new chassis rails, so we’ve welded four new chassis rails into it, and just bolt on stuff other than that like radiators, headlights, bonnet, undertray, front bar, grille, all that sort of stuff, which is all expensive carbon Audi bits.

“Rear wheel bearing, rear upright, panels on the rear as well, rear diffuser, it was a fairly substantial crash.”

Despite the laundry list of replacement parts, Russell is confident the car will be ready for tomorrow’s race.

After the crash, the car was returned to the Audi garage where it was stripped down and assessed before being taken to an on-site smash repair facility.

There the team has effected the repairs before the car was moved back to the garage to complete the fix.

“I hope by nine o’clock tonight we will be out of here,” Russell said.

“We’ve already had it on the patch to make sure it’s all square and true, so really when it comes back it’s just a matter of bolting the panels on.”

Prior to the crash, Holdsworth banked a time that will see the car line up in 19th on the grid for the race, which starts at 0545 AEDT Sunday morning.