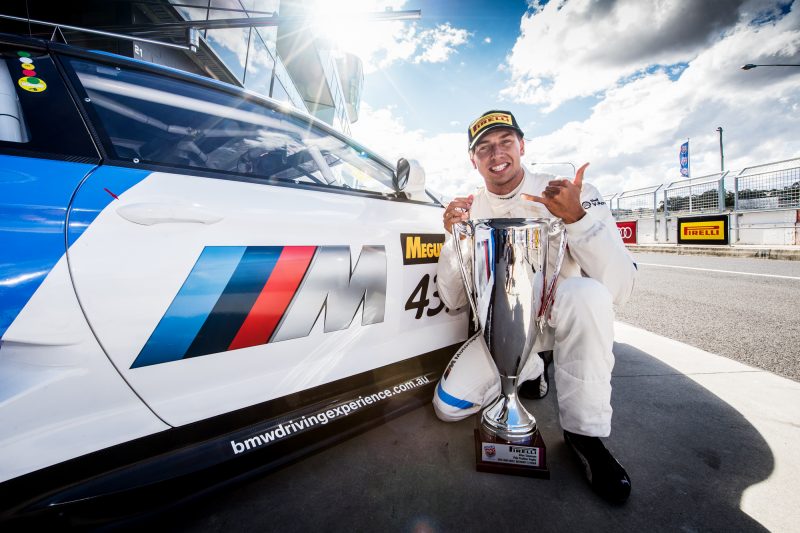 The 2014 Bathurst 1000 winner was the only man to lap Mount Panorama in 2:01s bracket as he delivered an impressive 2:01.93s in the M6 GT3 he shares with Augusto Farfus and Marco Wittmann.

Mostert and the German BMW squad faced a nervous wait as Kelvin van der Linde, the last man to go out in the shootout just missed out, ending up 0.2s adrift.

“We were close last year in the Pro-Am entry but it’s pretty special to go to the pointy end and actually get the pole this time with Schnitzer Motorsport and the BMW Motorsport group,” said Mostert.

“For me it’s amazing, the boys gave enough trust in me to qualify the car and we made the car better and better over practice.

“It’s a lot of hard work to fly a car all the way from Germany to put it on the pole so it’s fantastic.”

Van der Linde had starred in practice and qualifying and his pace continued to earn the #22 Jamec Pem Racing Audi a spot on the front row of the grid for Sunday’s race.

Audi will head up the second row courtesy of Christopher Haase, who set an early benchmark by becoming the first to to clock a time in the 2:02s bracket in the #74 Jamec Pem Racing R8 GT3.

Haase, a former Nurburgring 24 Hour winner, surpassed a time set by Luke Youlden in the unfancied Buik Motorworks, Lamborghini by 0.8s, who will start fourth.

The reigning Bathurst 1000 winner could have gone quicker after putting two wheels in the dirt coming onto the Conrod straight.

Elevated into the shootout following BMW Team SRM’s late exclusion, Strakka Racing’s Cameron Waters slotted into sixth position after posting the first lap in the session behind the wheel of the #55 Pro/Am entry.

Robin Frijns was unable to match the the front running pace leaving the #37 Audi Sport Team WRT entry in seventh.

The Dutchman ran wide at The Chase on his warm up putting dirt on his tyres.

Meanwhile, Shane van Gisbergen, the lap record holder at the event, struggled for outright speed in the #58 YNA Autosport McLaren and will start eighth, more than 1.7s off the pace.

Steven Kane put Bentley in ninth spot after his lap which featured a slight slide on the entry into The Cutting.

The top 10 was completed by Matt Campbell in the Competition Motorsport Porsche.

Campbell ran wide at Hell Corner which ruined his lap leaving him well adrift of the pace.

The Liqui-Moly Bathurst 12 Hour is scheduled to begin on Sunday at 0545 local time/AEDT.