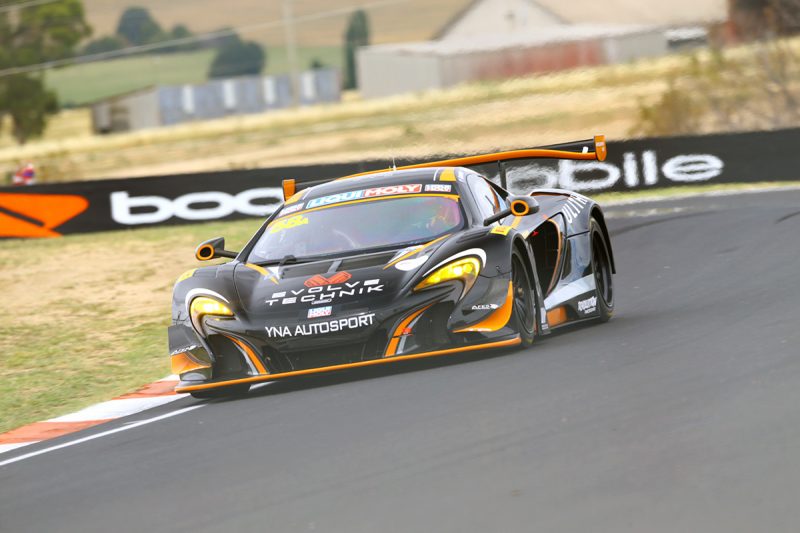 YNA Autosport’s all-Pro trio of Shane van Gisbergen, Craig Lowndes, and Come Ledogar believes that there is more to come from the #58 McLaren despite a relatively slow start to the Liqui-Moly Bathurst 12 Hour.

The combination of 2016 winner van Gisbergen, two-time winner Lowndes, and factory McLaren driver Ledogar did not figure near the top of the timesheets in Friday practice, despite the former holding the practice/qualifying and race lap records in the same model 650S.

Lowndes set the McLaren’s fastest lap of the day when he clocked a 2:05.0819s after the chequered flag in Practice 3, nearly two seconds off Frederic Vervisch’s ultimate benchmark in Practice 4.

Car #58 could have advanced further but for van Gisbergen being heavily obstructed by traffic and then prevented from completing a qualifying simulation by the red flag in Practice 4.

Lowndes’ previous starts in the 12 Hour have been in Audis and Ferraris, and is unconcerned with the crew’s standing as he acquaints himself with the McLaren.

“I’m just getting my head around the car, basically,” he explained to Speedcafe.com.

“Shane and Come were sort of doing more of the set-up side of it.

“I’m contributing but it’s more about me learning the car around the track.

“I did the five-dead (fastest lap time) but there’s a lot more in the car yet.

“For me it was just more long runs and I know that I got traffic at the end of it (fastest lap) so I know that it should have been a ‘four’, and Shane and Come know the car much better than I do.”

Ledogar, who won the Blancpain GT Series Endurance Cup with van Gisbergen in 2016, was also unperturbed by their form.

The Frenchman played down the importance of headline lap times on the first day of the weekend, instead focusing on the long game of Sunday’s 12-hour marathon.

“To be honest, it’s a 12 Hour race and we need to work out the strategy and to make our car quite consistent for the long stints, and it’s always this BoP thing we need to always sort out,” Ledogar told Speedcafe.com.

“I think at the moment we know where we are and we are quite confident because the car is well-balanced (but) we need to find clear laps in the traffic for sure.

“You don’t want to have the fastest lap of the race, you want to win the race, so for sure we worked on that.”

In the sister #47 650S, Scott McLaughlin experienced his first official running in a GT3 machine.

The 2017 Bathurst 1000 pole-sitter said that he was relatively at ease driving the McLaren around Mount Panorama, but had to get used to the superior aerodynamic performance in the flowing section of the circuit.

“Probably just trusting the car across the top knowing that you’ve got the grip to hold you, trusting it to do the time (was most difficult),” he told Speedcafe.com.

“To be honest it’s pretty smooth sailing so far, so if our weekend continues like this it’s going to be good.”

Each of the latter three regularly drive McLarens, but McLaughlin has been assisting Watson and West with circuit knowledge due to their Bathurst 12 Hour rookie status.

“To be honest I feel like it’s the track knowledge more so than anything (that is important),” McLaughlin told Speedcafe.com.

“I found it (the car) comfortable, and I’m also getting the team-mates up to speed.

“It’s Alex’s first time here so he’s struggling a little bit, but he’ll be on with it.”

Cars are next on track for Practice 5 tomorrow at 0855 local time/AEDT.

Previous Story VIDEO: Onboard with van Gisbergen in a McLaren GT3