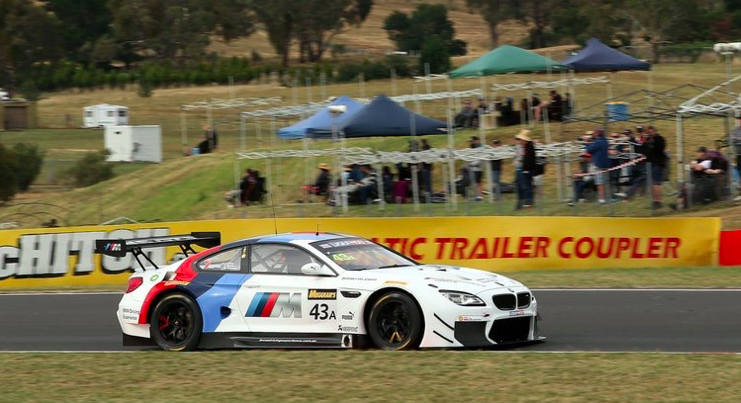 The #43 Schnitzer BMW has topped the third session at the Bathurst 12 Hour pic: BMW Motorsport

BMW continued its strong start to the Liqui-Moly Bathurst 12 Hour after edging Audi to the fastest time in third practice.

The #43 Schnitzer M6 GT3 of Chaz Mostert, Augusto Farfus and Marco Wittmann once again set the pace at Mount Panorama as times began to tumble.

Farfus, who was quickest in Practice 2, set the benchmark with a 2:03.42s on his Bathurst debut.

It proved to be tight at the top with 0.04s splitting the top two courtesy of Kelvin van der Linde in the #22 Jamec Pem Racing Audi R8 which he is sharing with Garth Tander and Fredrick Vervisch.

BMW’s fast start to the event was backed up by circuit rookie Philipp Eng, who was just 0.29s shy of the pace in the Steven Richards and Timo Glock BMW M6 GT3.

Craig Lowndes posted a flying lap in the dying minutes of the 45 minute session to claim ninth in the #58 YNA Autosport McLaren he will share with Shane van Gisbergen and factory McLaren driver Come Ledogar.

The session was interrupted after five minutes when the Practice 2 Class B leaders Team Carrera Cup Asia stopped on track before returning to the action later on to top the class again.

The brand new MARC II Mustang of Will Brown, Rod Salmon and Keith Kassulke were fastest in the Invitational class.

A fourth and final Bathurst 12 Hour practice of the day is scheduled for 1335 local time.