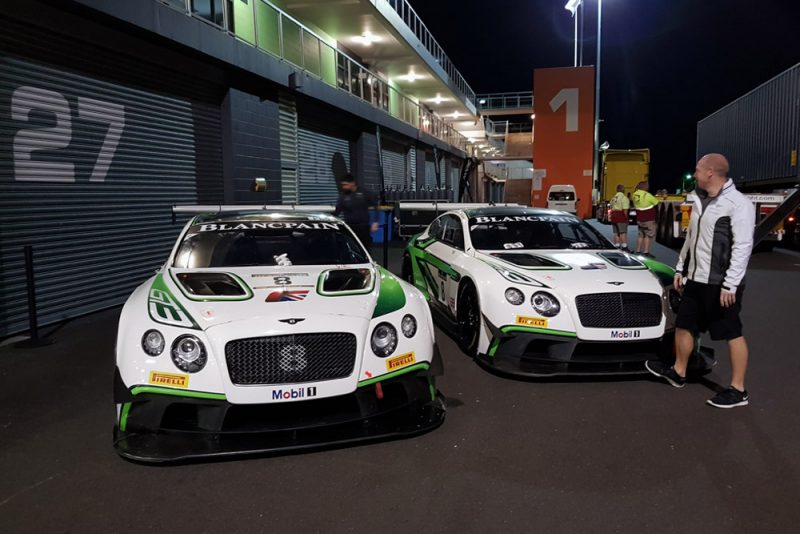 Bentley Team M-Sport can finally begin preparations for the the Liqui-Moly Bathurst 12 Hour following the arrival of its cars just hours before first practice.

The British-based squad took delivery of its two Continental GT3s at Mount Panorama this morning after a shipping delay that saw the cars and race kit only arrive in the country yesterday.

Five trucks arrived at Mount Panorama at 0330 AEDT, carrying the two Bentleys along with the race gear for both M-Sport and Strakka Racing.

As reported by Speedcafe.com, delays were caused when the ship suffered an engine failure and was caught up in a cyclone during its voyage that began in November.

A decision was subsequently made to unload the cars and race gear in Melbourne instead of Sydney and road freight the cargo through the night to Mount Panorama.

The cars are understood to be mostly prepped for action although set-ups are required to be installed, although new signing Jules Gounon is required to have a seat fitting.

He will partner Guy Smith and Steven Kane in the #17 entry, while the sister car will be piloted by an unchanged line-up of Andy Soucek, Vincent Abril and Maxime Soulet.

The team will work through the night to be ready for Practice 2 at 0900 local time with the opening session restricted to non-professional class entries.

Despite the delays, Bentley is keen to put the issues behind them and ensure its final event with the current spec Continental GT3 is a success.

“We are really keen to try and do as well as we can but we have not had the best preparation but we have been here before,” Bentley Team M-Sport race manager Matthew Wilson told Speedcafe.com.

“This is the last event for us as a team with this current car and we want to send it out on a high.”

After a month at sea, which featured a broken-down ship and tropical cyclone, and then a 10-hour drive from Melbourne, Bentley has finally arrived at the @Bathurst12hour! #FashionablyLate 💁🏼 pic.twitter.com/rQwXq8n0Zf