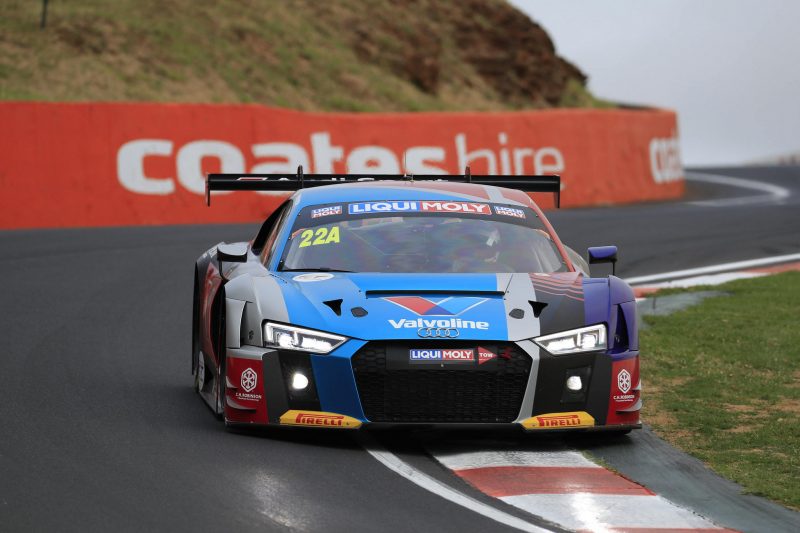 Factory Audi driver Frederic Vervisch has set the fastest ever Friday lap at the Liqui-Moly Bathurst 12 Hour in a shortened Practice 4 at Mount Panorama.

The Jamec Pem Racing Audi R8 leapt to the top of the times shortly after the halfway point of the session with a 2:03.13s, which was clearly the quickest lap of the day.

Vervisch’s time was quickly followed by a lap posted by the Practice 2 and 3 pacesetting #43 Schnitzer BMW, driven by Marco Wittmann. The time was 0.2s shy of the benchmark.

“Everything is going good. It’s difficult to see the real pace of everyone and the second thing is you have to have a clear lap as well,” said Vervisch.

“Not bad, for a first time for sure better than I expected so it’s good to be in front but you want to be there on Sunday.

“The car is really nice, we did some improvements from earlier in the day to now and I’m more comfortable and confident, it’s really cool. Like everybody describes its really nice.”

Co-driver Chaz Mostert had set the early pace in the entry which has been strong throughout the day. 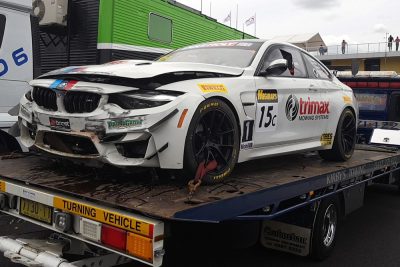 The BMW, driven by Kent Baigent, was involved in a collision with the Class A Mercedes-AMG piloted by Max Twigg.

Both cars remained in the gravel trap while Baigent clambered from the BMW, that suffered front end damage, but appeared to be winded. The driver has been taken to the circuit’s medical centre as a precaution.

“We went side by side into The Chase. I had a lot of closing speed and I thought he’d stay wide but he just moved across,” Twigg told Speedcafe.com.

“That was a 280km/h spin, sideways through the gravel.”

Audi and BMW continued to dominate the top section of the times with the #37 Audi Sport Team WRT entry fourth, ahead of the BMW Team SRM M6 GT3 of Steven Richards, Timo Glock and Philipp Eng.

After sitting out Practice 3 due to an engine change, the Lago Racing Lamborghini returned to finish sixth, courtesy of David Russell. The car was the top Pro-Am GT3 entrant.

The leading Porsche runner was the Craft Bamboo entry of Earl Bamber, Laurens Vanthoor and Kevin Estre in ninth.

The #55 Strakka Racing Mercedes-AMG was the quickest from the marque in 11th just ahead of Scott McLaughlin’s YNA Autosport McLaren in 12th spot.

Class B was topped by Team Carrera Cup Asia, while #46 Prosport Performance Porsche Cayman was the fastest in Class C.

The #67 MARC II Mustang took command of the Invitational class.

A 45 minute qualifying session for non Class A entries will take place before a 30 minute Class A hit-out.

The top 10 positions for Sunday’s race will be set via a Top 10 Shootout at 1610 local time/AEDT.