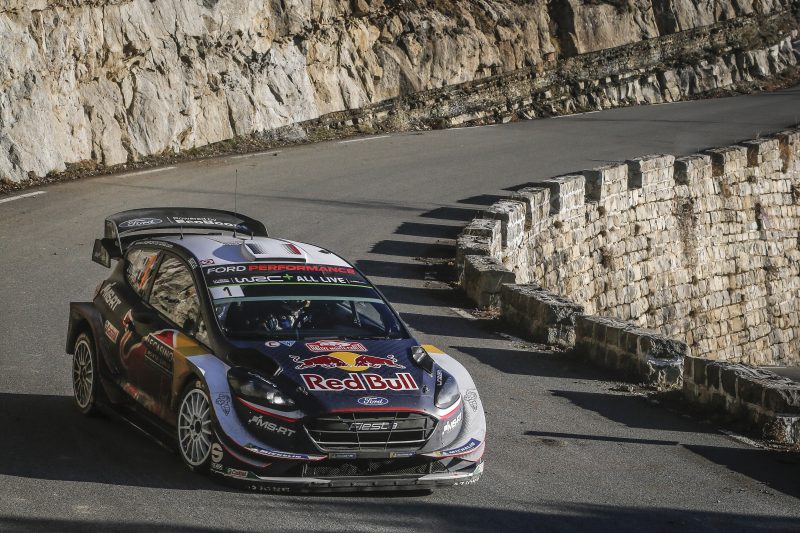 Sebastien Ogier has kicked off his fifth straight World Rally Championship title defence with an all-the-way victory in Rallye Monte-Carlo.

Ogier won both stages when the new season began on the Thursday night and led overall at the end of each of the other 15 special stages as well.

The M-Sport Ford driver beat Ott Tanak by 58.3s, with Jari-Matti Latvala making for two Toyotas on the podium.

Ogier came into the day with a 33.5s lead and grew that advantage to 46.2s on the morning loop, winning SS14.

That came despite his vision being briefly hampered by smoke from a flare on SS15, when he was seventh-fastest.

Tanak, who himself started Sunday with nearly a minute on Latvala, decided to play conservative and wrap up second position, even setting the slowest time of the WRC entries on SS15.

That left Ogier free passage to victory, and the Frenchman also grabbed another championship point for finishing fifth in the Power Stage.

“Rallye Monte-Carlo is a special event for me,” said Ogier.

“I’ve always done well here – I seem to have a really good connection with my home rally – and I’m super-happy to take another win.”

Latvala also took a low-risk approach on his way to third overall, safe in the knowledge that the third Yaris of Esapekka Lappi a long way behind, but still took two points out of the Power Stage.

Lappi had cost himself two minutes on Saturday when he hit a bank and incurred a puncture, but still looked like taking fourth when he extended his gap over Kris Meeke on the morning loop.

However, it came unstuck for the Finn during the Power Stage when he ran off and lost around 30s, enough to consign him to seventh overall.

Meeke, on the other hand, won the Power Stage in his Citroen C3 to seal fourth in the rally.

Thierry Neuville clawed his way back to a top five finish, having been 17th at the end of the opening night after sliding into a ditch.

The lead Hyundai driver was fastest through both SS15 and SS16, making for five stage wins in total, and also grabbed four bonus points for coming second in the Power Stage.

Team-mate Andreas Mikkelsen also salvaged something as he completed the round under Rally2 rules after alternator problems on the Friday, finishing third in the Power Stage.